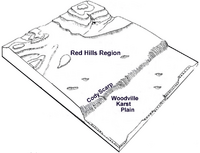 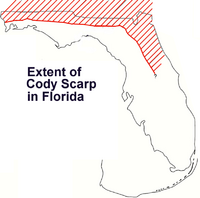 Extent of Cody Scarp in Florida

The Cody Scarp or Cody Escarpment is located in north and north central Florida United States. It is a relict scarp and ancient persistent topographical feature formed from an ancient early Pleistocene shorelines of ~1.8 million to 10,000 years BP during interglacial periods. The Cody Scarp has a slope of 5% to 12%.

The scarp, at 42.6 meters (140 feet) to 45.7 meters (150 feet) above sea level, is most prominent in Leon County, Florida where it runs east to west. It is a remnant of two Pleistocene interglacial shorelines. The first shoreline is known as the Okefenokee Terrace. The second is known as the Wicomico Terrace.

In Jefferson County to the east, the scarp coincides with the Wicomico Terrace with an elevation at 40–45 feet above mean sea level.

The scarp separates the Hawthorn Group of fine to medium grained sandy clays and silty, clayey sands of the Red Hills Region of north Florida and southwest Georgia to the north from the fine to medium fine grained, partially recrystallized, silty to sandy limestones of the Gulf Coastal Lowlands to the south. A dramatic difference in elevation is seen here as the Red Hills, at a maximum of 70 meters (230 feet) mean sea level (MSL), drops to the area known as the Woodville Karst Plain, an elevation of 50 to 80 feet (15 to 24 meters) within 15 miles (24 km).

On the Woodville Karst Plain, the Suwannee Limestone of the Floridan Aquifer is shallow and exposed in many places. This is the primary recharge area for Wakulla Springs and where the aquifer is most vulnerable to pollution on the land surface. It is also a zone of high sinkhole activity.

In Alachua County, Florida this westward-facing escarpment between an upland plateau to the east and a karst plain to the west has elevations up to 190 feet (57.9 meters) mean sea level (MSL). The Cody Scarp runs right through Gainesville, Florida.

All content from Kiddle encyclopedia articles (including the article images and facts) can be freely used under Attribution-ShareAlike license, unless stated otherwise. Cite this article:
Cody Scarp Facts for Kids. Kiddle Encyclopedia.