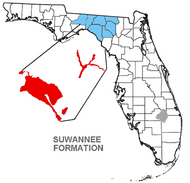 Location of Suwannee Formation in red.

Suwannee Limestone is found in the peninsula carbonate outcroppings on the northwestern, northeastern and southwestern flanks of the Ocala Platform. However, Suwannee Limestone is not present on an area known as Orange Island on the eastern side of the Ocala Platform due to erosion, nondeposition or both. This limestone is present in southeastern Leon, Jefferson, Madison, Taylor, Lafayette counties as well as Hamilton along the upper Suwannee River basin, and southward into Suwannee County, Florida.

Suwannee Limestone consists of a white to cream, poorly to well hardened, fossil rich, vuggy to moldic grainstone and packstone. The dolomitized parts of the Suwannee Limestone are gray, tan, light brown to moderate brown, moderately to well indurated (hard), finely to coarsely crystalline, dolomite with limited occurrences of fossil-bearing beds. Limestone in silicate form is common in Suwannee Limestone.

All content from Kiddle encyclopedia articles (including the article images and facts) can be freely used under Attribution-ShareAlike license, unless stated otherwise. Cite this article:
Suwannee Limestone Facts for Kids. Kiddle Encyclopedia.