Collingullie is a village 26 kilometres (16 mi) north-west of Wagga Wagga in the Riverina region of New South Wales, Australia. The village is located on the Sturt Highway, between Wagga Wagga and Narrandera, at the crossroads with the road to Lockhart.

At the 2016 census, Collingullie had a population of 221 people. The name, Collingullie, could have derived from an Aboriginal word meaning 'boggy ground'.

Collingullie Post Office opened on 1 August 1879 and closed in 1982. The town's school, Collingullie Public School which has 56 students, is located on Urana Street. 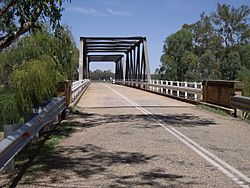 Bridge over Murrumbidgee River on Millwood to Collingullie road

All content from Kiddle encyclopedia articles (including the article images and facts) can be freely used under Attribution-ShareAlike license, unless stated otherwise. Cite this article:
Collingullie Facts for Kids. Kiddle Encyclopedia.