The Colonial Building located in St. John's was the home of the Newfoundland government and the House of Assembly from January 28, 1850 to July 28, 1959. In 1974 it was declared a Provincial Historic Site.

In 1832 when the Colony of Newfoundland governed itself by representative government there was not a formal building assigned to house the legislature. The first home of the Legislature was a tavern and lodging house owned and operated by a Mrs. Travers. The stay was brief as in the legislature's haste and inexperience it forgot to vote approval for the funds to pay rent. For the next seventeen years they would meet in various temporary quarters. In 1846 an act was approved authorizing the construction of a Colonial Building as a permanent home.

On May 24, 1847, the cornerstone was laid by the Governor, Major-General Sir John Gaspar Le Marchant. The official opening of the Colonial Building took place on January 28, 1850, by Governor Le Marchant for the second session of the House's fourth general assembly. 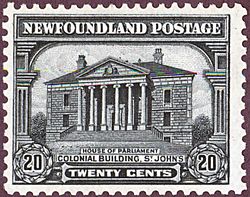 Colonial Building on a postage stamp of 1928 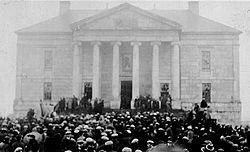 The riot at Colonial Building in 1932 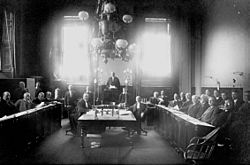 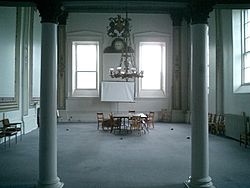 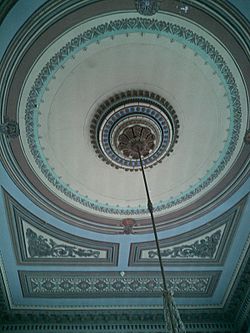 James Purcell was the main architect and Patrick Keough was the contractor. Colonial Building, built in the style of neoclassical was constructed of white limestone specially imported from Little Island, Cork, Ireland. The facade features a massive portico consisting of six ionic columns supporting an entablature triangular pediment. The pediment is decorated with the Royal Arms sculpted in deep relief. The interior hall is screened with ionic columns supporting a quadrangular lantern dome. the two legislative chambers, each with a ceiling height of twenty eight feet, are decorated with corinthian pilasters. The whole structure was built at a cost of £18,335.

In 1880 Alexander Pindikowski, a Polish fresco painter, then serving a 15-month prison sentence for forgery received a one-month reduction in his sentence for the immaculate fresco painting work he completed at both Colonial Building and Government House.

It was also the site of a number of political riots and disturbances. One of those was the public protest on April 5, 1932 for maladministration and corruption in government when all the windows were broken, doors smashed and furniture destroyed, which cost $10,000 to repair. The Prime Minister, Sir Richard Squires, barely escaped the building at that time.

The building was also the site of Newfoundland's first bank robbery, in 1850. Located in the basement of the Colonial Building was the Newfoundland Savings Bank and it was robbed of £413.

On July 28, 1959, the provincial legislature had its last working session in the building before relocating to the newly completed Confederation Building on Prince Philip Drive.

From 2010 to 2015 restoration work in the interior of building will be undertaken to stabilize and restore the ceilings of the two chambers.

The front facade and interior lobby area will be restored to the period during the 1850s. This means that the building will be closed to visitors until the renovations are complete.

All content from Kiddle encyclopedia articles (including the article images and facts) can be freely used under Attribution-ShareAlike license, unless stated otherwise. Cite this article:
Colonial Building Facts for Kids. Kiddle Encyclopedia.