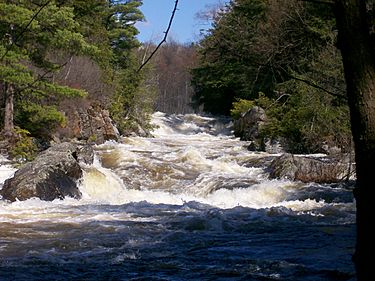 The Raquette River in the Stone Valley Recreational Area

Colton is a town in St. Lawrence County, New York, United States. The population was 1,451 at the 2010 census. The town, originally named "Matildaville", is named after early settler Jesse Colton Higley.

Colton is in the southeastern part of the county, south of Potsdam.

The first land patents were issued in 1776. The first settlement occurred around 1825 near Colton village in the northern part of the town.

Colton was organized in 1843 from part of the Town of Parishville. Additional land from Parishville was added to Colton in 1851, and Colton was increased in 1876 from territory taken from the Town of Hopkinton.

The Zion Episcopal Church and Rectory was listed on the National Register of Historic Places in 2003. The Hepburn Library of Colton was added in 2012.

Colton is the largest town in St. Lawrence County. St Lawrence county is the largest county in NY state. The south town line is the border of Hamilton County and Herkimer County.

There were 604 households, out of which 25.2% had children under the age of 18 living with them, 55.6% were married couples living together, 6.1% had a female householder with no husband present, and 32.8% were non-families. 26.0% of all households were made up of individuals, and 10.3% had someone living alone who was 65 years of age or older. The average household size was 2.40 and the average family size was 2.90.

Communities and locations in Colton

All content from Kiddle encyclopedia articles (including the article images and facts) can be freely used under Attribution-ShareAlike license, unless stated otherwise. Cite this article:
Colton, New York Facts for Kids. Kiddle Encyclopedia.