Cranberry Lake is a lake on the east branch of the Oswegatchie River in the Adirondack Park in New York in the United States. It is the third largest lake in the Adirondack Park (after Lake George and the Great Sacandaga Lake). About 75 percent of the shoreline is owned by State of New York; the 118,000-acre (480 km2) Five Ponds Wilderness Area abuts its south shore, and the Cranberry Lake Wild Forest covers much of its remaining shoreline.

Several islands are within the lake, the largest being Joe Indian Island and Buck Island. The Cranberry Lake Biological Station, also part of SUNY-ESF, is located on Barber Point. 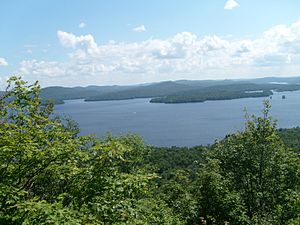 Recreation and points of interest

A peninsula jutting into the lake from the north contains Bear Mountain and state camping facilities. One end of the Bear Mountain Trail leaves from campsite loop 3. The other end, a trail head with plenty of good parking, is located much closer to the campground entrance. The hike is fairly rigorous, but from start to the top it is only about 1-mile (1.6 km). The lookout spot near the top provides a great view to the south and south west, mainly of Joe Indian and Buck islands.

There are several private camps on the lake's southern shore, including an island called, "Chair Rock Island". A large rock on Barber Point near the Biological Station bears an engraved memorial for international fly casting champion of the late 1800s, Reuben Wood, designer of the Reub Wood fishing flies.

There also exists a large camp setting called Wildcliffe Lodge (formerly "Hoppies" and then "Verns") that used to have an inn, bar and restaurant. The dining room was the former single room log cabin of Philo Scott, a hermit who married local resident Cordelia Stevens in 1856 and had eight children between 1858 and 1879 of Big Deer Pond. Chair Rock Lodge was another popular dining and lodging establishment on the South Shore, but both are now closed.

The Indian Mountain Club was also on the South Shore. "Sports" from downstate New York enjoyed dining, lodging and outdoor pursuits such as hunting, fishing, and shooting. A large garden provided fresh vegetables and remnants of this still exist on private property abutting the Five Ponds Wilderness.

Fish species present in the lake are smallmouth bass, northern pike, brook trout, rock bass, yellow perch, brown bullhead, sunfish and brown trout. There is a state owned hard surface ramp on Route 3 by the outlet dam. There is also a state owned car top launch at the Cranberry Lake Campground and one more at the New York State Rangers School in Wanakena, New York.

The lake was named for the extensive cranberry bogs that it once contained. In 1865, the state authorized the building of a dam on the east branch of the Oswegatchie that doubled the lake's surface area and killed thousands of trees, the stumps of which still remain in some areas. In 1902, the Rich Brothers Lumber Company purchased 16,000 acres (65 km2) on the southwestern shore of Cranberry Lake, and constructed a lumber mill. Housing for the millworkers was built in part from lumber salvaged from the company's abandoned Pennsylvania lumber operation. There were up to 1500 workers at the Rich Bros. mill and associated industries.

A logging railroad was constructed connecting Wanakena to the Carthage & Adirondack Railroad at Benson Mines, starting operation in 1905. The railroad allowed tourists easy access to the area. In 1913, a second railroad called the Grasse River Railroad was built by the Emporium Lumber Company, connecting Cranberry Lake to the New York Central Railroad at Childwold Station near Conifer, NY.

The Rich Bros. Lumber Co. donated 1,800 acres (7.3 km2) in the vicinity of Cranberry Lake to the New York State Ranger School in 1912. Businessman Charles Lathrop Pack donated 1,000 acres (4.0 km2) of what today is the Cranberry Lake Biological Station to the New York State College of Forestry in 1923. Six years later, in 1929, the International Paper Company donated 500 acres (2.0 km2) to the Ranger School. By 1940, the state had purchased most of the remaining lands of the former lumber companies.

All content from Kiddle encyclopedia articles (including the article images and facts) can be freely used under Attribution-ShareAlike license, unless stated otherwise. Cite this article:
Cranberry Lake Facts for Kids. Kiddle Encyclopedia.