Fine is a town in St. Lawrence County, New York, United States. The population was 1,512 at the 2010 census. The town is named after Judge John Fine, a businessman involved in settling the town.

The Town of Fine is in the south part of the county, south of Canton.

The SUNY-ESF Ranger School is in the eastern part of the town.

The first settlement was begun by Elias Teall, who made a contract on October 24, 1823, with the proprietors of the east half of Scriba, and undertook to secure settlers on the tract. He built a mill on the east branch of the Oswegatchie and made some small improvements; but his undertaking failed. September 6, 1828, James C. Haile made a contract with the proprietors, and built a sawmill and a small grist mill on the Oswegatchie; he induced other settlers to come. In May 1833, he also left the town, his settlers having abandoned him. In February 1834, Arnasa I. Brown contracted with the owners for the Haile improvements and an additional tract of land, and in March of that year moved his family in; his nearest neighbors were ten miles away. A few others joined him, and by 1843 there were 43 or 44 voters.

The little hamlet of Fine is on the east branch of the Oswegatchie River about five miles southeast of South Edwards. It has been locally known as "Smithville" from William P. Smith, who was an early resident there.

The town was organized in 1849 from parts of the Towns of Pierrepont and Russell.

The Fine Town Hall was listed on the National Register of Historic Places in 1996.

The town is within the Adirondack Park.

The south town line is the border of Lewis County and Herkimer County.

The east branch of the Oswegatchie River flows in a north and westerly direction from Cranberry Lake, through Fine.

There were 667 households out of which 25.8% had children under the age of 18 living with them, 54.9% were married couples living together, 7.5% had a female householder with no husband present, and 32.2% were non-families. 27.1% of all households were made up of individuals and 13.9% had someone living alone who was 65 years of age or older. The average household size was 2.36 and the average family size was 2.83. 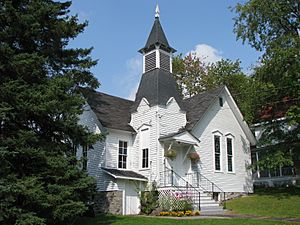 Communities and locations in Fine

All content from Kiddle encyclopedia articles (including the article images and facts) can be freely used under Attribution-ShareAlike license, unless stated otherwise. Cite this article:
Fine, New York Facts for Kids. Kiddle Encyclopedia.