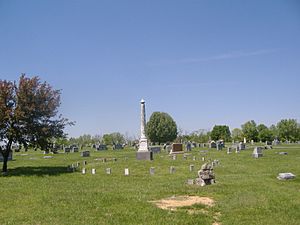 The soldiers buried around the monument were from Kentucky, Georgia, Tennessee, and Texas. Twenty-one in total, they were reinterred atop the Crab Orchard Hill in 1871.

The monument itself is a 10 feet (3.0 m) tall obelisk made of white marble. The inscriptions mention the home states of the soldiers buried around the obelisk, with the motto Constantes Esque Ad Mortem Animas Perjecere on the north side, and a lengthier passage on the south side reading "Here off duty til the last reveille, rest the Southern soldiers, few in number, who were slain in this and in adjoining counties during the War of Secession. They fell among strangers, unknown, unfriended, yet not unhonored for strangers' hands have gathered their ashes here and placed this shaft above them. That constancy, valor, sacrifice of self, though displaced in fruitless enterprise, may not be unremembered". The monument was deliberately carved to appear draped as by a curtain.

In June 2007 the monument was again dedicated in a ceremony that included then Kentucky Governor Ernie Fletcher, the U.S. Army, Shriners, and a parade.

All content from Kiddle encyclopedia articles (including the article images and facts) can be freely used under Attribution-ShareAlike license, unless stated otherwise. Cite this article:
Confederate Monument at Crab Orchard Facts for Kids. Kiddle Encyclopedia.