The Battle of Camp Wildcat (also known as Wildcat Mountain and Camp Wild Cat) was one of the early engagements of the American Civil War (Civil War). It occurred October 21, 1861, in northern Laurel County, Kentucky during the campaign known as the Kentucky Confederate Offensive or Operations in Eastern Kentucky (1861). The battle is considered one of the first Union victories of the Civil War, and marked the second engagement of troops in the Commonwealth of Kentucky.

On April 15, 1861, at the outbreak of the Civil War, President Abraham Lincoln called upon the States remaining in the Union to provide volunteers to suppress the insurrection in the seven States which had seceded from the Union by that date. Pro-Confederate Kentucky Governor Beriah Magoffin refused to send troops, but since the majority of the members of the Kentucky General Assembly were pro-Union, Lincoln's call for volunteers did not prompt the State to secede. On May 16, a Kentucky legislative committee recommended that the State remain neutral in the conflict and Governor Magoffin proclaimed the State's neutrality on May 20.

In elections on August 5, 1861, Kentucky voters returned a veto-proof majority of pro-Union members to the House of Representatives and Senate. On August 6, 1861, Camp Dick Robinson, a Union camp, was established near Lexington. On September 2, 1861, the Kentucky General Assembly raised the U.S. flag over the Kentucky State Capitol at Frankfort.

On September 3, 1861, Confederate Maj. Gen. Leonidas Polk ordered Brig. Gen. Gideon Pillow to seize Columbus, Kentucky on the Mississippi River before Union forces could do so. This ended Kentucky's neutrality, led to Union Brig. Gen. Ulysses S. Grant's seizure of Paducah, Kentucky on September 6, 1861, and other military movements and actions by both Union and Confederate armies in Kentucky soon afterwards.

Brig. Gen. Felix Zollicoffer's Confederates had moved from Tennessee to push from the Cumberland Gap into central Kentucky in an effort to gain control of that important border state. On September 14, 1861, ten days after his 5,400-man force left their base, Zollicoffer occupied the Cumberland Gap and took a position at the Cumberland Ford (near present-day Pineville, Kentucky) to counter Unionist activity in the area, where Union supporters had been organizing and training recruits from Kentucky and east Tennessee at Camp Andrew Johnson near Barbourville, Kentucky.

Battle of Barboursville and aftermath

On September 19, 1861, Zollicoffer sent about 800 men under Col. Joel A. Battle against Camp Andrew Johnson, which had largely been vacated, with the Union recruits having moved to nearby Camp Dick Robinson, where several thousand Federal troops were gathered under the command of Brig. Gen. George H. Thomas. As Battle's men approached Camp Johnson, they met a force of 300 pro-Union Home Guards under Capt. Isaac J. Black, who hastily removed the planking from the bridge to prevent the Confederates from crossing it. Sharp skirmishing broke out, but Battle's superior numbers prevailed and Zollicoffer's Confederates drove off Battle's men, with the Union force suffering 1 killed, 1 wounded and 13 captured and the Confederates losing 7 dead. His men seized the camp, destroyed the buildings, and captured the arms and equipment left behind by the retreating recruits.

Although Zollicoffer briefly withdrew to his camp at Cumberland Ford near Cumberland Gap, he sent a detachment of his men to drive off another Union Home Guard force at a camp at Laurel Bridge, in Laurel County, Kentucky soon after the Battle of Barboursville. On September 28, another Confederate detachment seized 200 barrels of salt and destroyed the Goose Creek Salt Works in Clay County, Kentucky. They returned to camp at Cumberland Ford on September 30. On October 16, Zollicoffer returned to the offensive in an effort to move into central Kentucky. 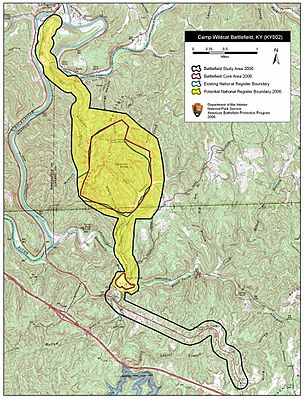 Zollicoffer then sent the 29th Tennessee Infantry Regiment and several companies of the 17th Tennessee Infantry to attack a location called the South Rim across the road from Round Hill. By then, the Union had fortified this point and the Confederate attack on this point also failed. Later, the Confederates failed to detect a gap between the 33rd Indiana Infantry and the 7th Kentucky Volunteer Infantry Regiment (U.S.) before Col. Garrard sent reinforcements to close it. With casualties mounting to no effect, Zollicoffer ceased attacking the Union position. The Confederates withdrew during the night. They continued their retreat to Cumberland Ford, which they reached on October 26.

Union casualties were 5 killed and 20 wounded while the Confederates suffered 11 killed and 42 wounded or missing.

In November, the Union force completed the Big Sandy Expedition. This set the stage for the Battle of Mill Springs and the death of Gen. Zollicoffer on January 19, 1862.

The battlefield, about nine miles northwest of modern-day London, Kentucky, is located on land held by the Daniel Boone National Forest and is in private hands. The Confederate Monument at Crab Orchard miles to the west memorializes some of the Confederates that died at the battle.

Much of the battlefield, almost 130 acres (53 ha), was listed on the National Register of Historic Places in 1979. Another 440 acres (180 ha) area, embracing two sections of the battlefield that had been designated historical archaeological sites, was added to the original designation in 2006. The Civil War Trust (a division of the American Battlefield Trust) and its partners have acquired and preserved 264 acres of the battlefield.

All content from Kiddle encyclopedia articles (including the article images and facts) can be freely used under Attribution-ShareAlike license, unless stated otherwise. Cite this article:
Battle of Camp Wildcat Facts for Kids. Kiddle Encyclopedia.