Confederate artworks in the United States Capitol facts for kids 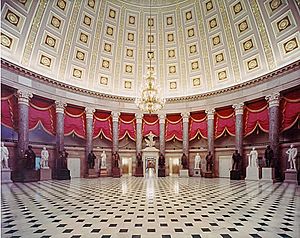 There are eight Confederate figures in the National Statuary Hall Collection, in the United States Capitol.

In the National Statuary Hall Collection in the United States Capitol, each state has provided statues of two citizens that the state wants to honor. The following Confederate figures are among them, many in Confederate Army uniforms. Dates reflect when the statue was given to the collection:

Other art representing Confederates in the Capitol

The Statue of Jabez Lamar Monroe Curry (Alabama, 1908) was replaced by a statue of Helen Keller in 2009

On June 18, 2020, Speaker of the House Nancy Pelosi ordered four paintings of former Confederates removed from the Speaker's Gallery in the Capitol in the wake of the nationwide protests over the killing of George Floyd while in police custody. "We didn't know about this until we were taking inventory of the statues and the curator told us that there were four paintings of Speakers in the Capitol of the United States, four Speakers who had served in the Confederacy," Pelosi told reporters in the Capitol.

On July 22, 2020, in the midst of the George Floyd protests, the U.S. House of Representatives voted 305–113 to remove a bust of Chief Justice Roger B. Taney (as well as statues honoring figures who were part of the Confederacy during the Civil War) from the U.S. Capitol and replace it with a bust of Justice Thurgood Marshall. The bill called for removal of Taney's bust within 30 days after the law's passage. The bust had been mounted in the old robing room adjacent to the Old Supreme Court Chamber in the Capitol Building. The bill (H.R. 7573) also created a "process to obtain a bust of Marshall ... and place it there within a minimum of two years." After the bill reached the Republican-led Senate on 30 July 2020 (S.4382) it was referred to the Committee on Rules and Administration, but no further action on it was taken.

All content from Kiddle encyclopedia articles (including the article images and facts) can be freely used under Attribution-ShareAlike license, unless stated otherwise. Cite this article:
Confederate artworks in the United States Capitol Facts for Kids. Kiddle Encyclopedia.