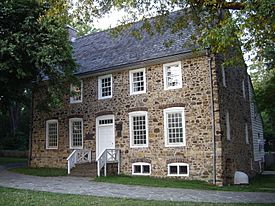 The Conference House within the park

Conference House Park is a park in Tottenville, Staten Island, New York City. The park is located along the Arthur Kill coast where the kill opens into Raritan Bay. It contains clay bluffs, part of the terminal moraine, formed when the Wisconsin Glacier receded 10,000 years ago. Ward's Point, the southernmost point in New York state, is located in the park.

Conference House Park is named after the historic Conference House a c. 1680 stone manor house in which a peace conference was initiated on September 11, 1776 by Lord Howe representing the British Crown with representatives of the Continental Congress including Benjamin Franklin, in an effort to halt the American Revolution. The area of the park was once part of Bentley Manor owned by the Billop family. The Henry Hogg Biddle house constructed between 1845 and 1853 is another historic structure in the park. The park contains several other buildings such as the Ward House, the Biddle House, and the Rutan-Beckett House.

A new pavilion opened in 2002. The park was slated for improvements during 2008-2009, including the restoration of the Biddle House, new educational exhibits, and a second playground, one of five which are planned for Staten Island as part of Mayor Michael Bloomberg's PlaNYC initiative. The extensive renovation finally started in 2017.

A Lenape Indian campsite and burial ground, known as Burial Ridge, are located within the boundaries of the park, set back from the clay bluffs. In the late eighteenth century George H. Pepper of the American Museum of Natural History conducted archaeological digs on the site, unearthing the remains of Lenape buried there. There are still shell middens visible along the shore line that become exposed due to erosion. The Lenape graveyard was looted for many years by area inhabitants and others seeking to recover the grave goods buried with the bodies.

It also houses a pavilion on the west beach with a characteristic turquoise roof, paths for walking and biking, and the Lenape playground (named for the area's original Native American inhabitants), which is frequented by residents of the Tottenville and Tottenville Beach neighborhoods.

The park is the southernmost point in both New York City and New York state, located at Ward's Point at the southern terminus of Hylan Boulevard. Many community events are held there every year, including a locally popular fireworks show every 4th of July. From 2002-2004 the park was renovated and upgraded, during which the aforementioned pavilion, paths, and playground were constructed, as well as a new visitors' center and visitor parking. The park has also been referred to as Swinnerton Park, usually with respect to the Lenape playground, which is located at the end of Swinnerton Street. The footpaths offer views of waterside New Jersey towns across Raritan Bay, while the pavilion overlooks the Arthur Kill and Perth Amboy, New Jersey.

All content from Kiddle encyclopedia articles (including the article images and facts) can be freely used under Attribution-ShareAlike license, unless stated otherwise. Cite this article:
Conference House Park Facts for Kids. Kiddle Encyclopedia.