Tottenville is a neighborhood on the South Shore of Staten Island, New York City. It is the southernmost settlement in both New York City and New York State. Tottenville is bounded on three sides by water: the east side abuts New York Bight while the south and west sides are bordered by Arthur Kill. Nassau Place, Bethel Avenue and Page Avenue form the neighborhood's northern border.

The settlement was originally named Bentley Manor by one of its first settlers, Captain Christopher Billop (1638–1726), a member of the Royal Navy, after his own ship. In 1869 it was renamed as Tottenville after John Totten and his prominent local family of that name, some of whom served as Loyalists under Billop during the American Revolutionary War.

The Raritan band of the Unami Indians, a branch of the Lenape or Delaware nation, were the original inhabitants of all Staten Island, including Tottenville. The largest pre-European burial ground known as Burial Ridge, is located in Conference House Park. 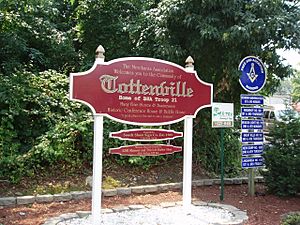 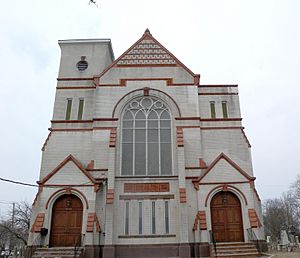 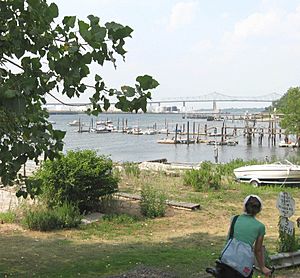 A view of Arthur Kill, the waterway between Staten Island and the New Jersey mainland

During the colonial period and for a significant time thereafter, Tottenville was an important waypoint for travelers between New York City -- of which Staten Island did not formally become a part until 1898 -- and Philadelphia, as it was the site of a ferry that crossed the Arthur Kill to the Ferry Slip in Perth Amboy, New Jersey. The ferry became less important when the Outerbridge Crossing opened in 1928, but continued to operate until 1963.

Two distinctive landmarks stand at the northern approaches to the neighborhood: the Bethel United Methodist Church, erected in 1840 and rebuilt on the same site in 1886 after a fire destroyed the original structure; and an abandoned factory originally built in 1900 as Nassau Smelting's plant that was later used for recycling by Lucent Technologies (closed 2001). Tottenville is bounded on the west and south by the Arthur Kill, and on the east by Raritan Bay, the mouth of which lies immediately to the south of Arthur Kill's entry to the bay (which is also sometimes reckoned as being part of the Atlantic Ocean). In Tottenville's north end is the Conference House, a home built by Christopher Billop and so named because it was the site of unsuccessful negotiations to end the Revolutionary War in 1776. The home is now the centerpiece of the city park of the same name. The Billop family, who built the estate in 1678, continued to own it and the surrounding property during the 1776 meeting, but their land was confiscated in 1784 because family members had been Tories during the war.

Many small factories once dotted the neighborhood's western shoreline, but most are no longer in operation. Boat construction also once flourished along the shoreline, but the industry was rendered obsolete in 1900 when boats began being constructed of steel rather than wood. World War I spawned a revival of shipbuilding activity, but it proved only temporary, and Tottenville's last shipyard closed in 1930. Another activity formerly prominent in Tottenville was the harvesting of oysters from the surrounding waters. This practice ceased in 1916 when the New York City Health Department determined that pollution made it unsafe. As of 2005, oyster harvesting has since been reopened.

During the 1990s, the section of Tottenville southeast of Hylan Boulevard, until then nearly uninhabited, saw massive new home construction. The district's population density and crime rate still rank among the lowest in New York City. Until the 2000s, commercial development had largely been restricted to the Main Street corridor in the heart of the neighborhood. A second commercial core began to emerge at the north end of the community along Page Avenue and west of Amboy Road at this time. Further expansion on the neighborhood's north end was seen in 2005 with the redevelopment of the old Nassau Smelting plant. Site clean up began in October 2006, and was scheduled to be finished within a year. The site had suffered chemical contamination, as it was principally used to recycle copper and other metals from old wires. Mill Creek, which runs through the site, was also scheduled to be cleaned as part of the project.

Many large, stately homes built in Tottenville in the 19th Century remain standing. However, in recent years, land developers have been buying up the property on which several of these homes have stood, with the intention of demolishing them and constructing townhouses on the property. The fate of one such home, which had been the parsonage of Bethel Methodist Church, located at 7484 Amboy Road, (there was an extremely large back yard to this house) became the focus of an intense local controversy in March, 2005, when the community rose up in opposition to plans by builder John Grossi, who had purchased the property, to raze the home and construct five townhouse units on the site. On March 17 Grossi angrily spray-painted graffiti on the house, built circa 1870, which included a threat to populate it with low-income tenants under the federal Section 8 housing program; the resulting public outcry prompted New York City mayor Michael Bloomberg to have the home declared a landmark, thus preventing its demolition. Bloomberg announced his decision to do this during a visit to Tottenville on March 22, and the New York City Landmarks Preservation Commission made the designation official on April 12. Since then, no noticeable effort has been made to restore the home, which remains in a dilapidated condition.

In March 2008, over 20 blocks in the northern section of the neighborhood were changed over to one-way streets, more effectively managing traffic on the older, narrower blocks. 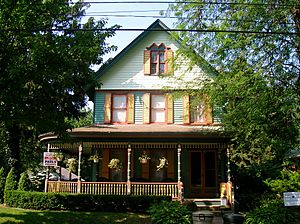 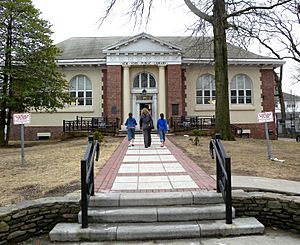 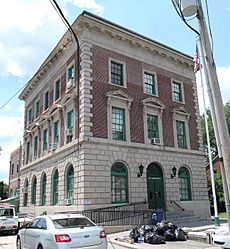 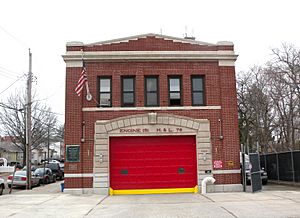 Tottenville has a strong Victorian architecture heritage, akin to neighborhoods on Staten Island's North Shore. This is unique to this South Shore neighborhood, compared to the other South Shore areas, all of which were developed much later. Seven buildings in Tottenville have been honored with the Preservation League of Staten Island Award: 88 Bentley Street, 24 Brighton Street, 213 Wood Avenue, 115 Bentley Street, 7647 Amboy Road, 7639 Amboy Road, and the Tottenville Branch of the New York Public Library. 88 Bentley Street has been photographed as an example of Staten Island's carefully restored Victorian homes in "New York City - The Five Boroughs: A Photographic Tour" by Carol M. Highsmith and Ted Landphair, published 1997. In addition, the Old Church of St. Joachim and St. Anne was restored after a fire into a home for children.

The entirety of Community District 3, which comprises Tottenville and other South Shore neighborhoods, had 159,132 inhabitants as of NYC Health's 2018 Community Health Profile, with an average life expectancy of 81.3 years. This is about the same as the median life expectancy of 81.2 for all New York City neighborhoods. Most inhabitants are youth and middle-aged adults: 21% are between the ages of between 0–17, 26% between 25–44, and 29% between 45–64. The ratio of college-aged and elderly residents was lower, at 8% and 16% respectively.

The neighborhood is composed mostly of upper-middle-class families, and it has the highest proportion of Roman Catholics than any other neighborhood on the island (94% Roman Catholic). In the mid 2000s the first Mexican immigrants settled here. There have also been a growing number of Coptic Orthodox Christians from Egypt; as of 2012, the Virgin St. Mary and St. George Coptic Orthodox Church in Tottenville is one of two Coptic parishes on Staten Island. Tottenville's white Population is 60% ethnic Italian as of 2012. 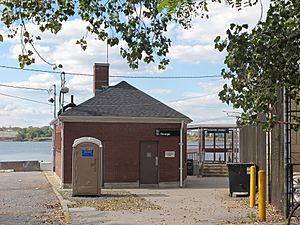 A view of the southern end of Tottenville Station, 2013

The Tottenville station has been the southern terminus of the Staten Island Railway since the railway was extended to the neighborhood on June 2, 1860. Today, the neighborhood of Tottenville contains the two southernmost stations along the line: Tottenville station (the southernmost railway station in New York state), and Arthur Kill station. Before Arthur Kill opened on January 21, 2017, there were two other stations which were Atlantic (named after the defunct Atlantic Terra Cotta Co. factory nearby) and Nassau (referring to Nassau Smelting and Refining, the original name of the factory later taken over by Lucent Technologies), which closed on the same day that Arthur Kill was opened, as Arthur Kill replaced both of them. Atlantic and Nassau stations are now closed and demolished. The 14-mile trip to the St. George Terminal takes 42 minutes.

Tottenville is served by the S59, S78 local buses. Express bus service to and from Manhattan is provided by the SIM2, SIM25, SIM26.

Though no highways pass through the neighborhood, NY Route 440 and Korean War Veterans Parkway (formerly known as Richmond Parkway) are located nearby.

Tottenville and the South Shore generally have a similar rate of college-educated residents to the rest of the city as of 2018[update]. While 41% of residents age 25 and older have a college education or higher, 8% have less than a high school education and 51% are high school graduates or have some college education. By contrast, 39% of Staten Island residents and 43% of city residents have a college education or higher. The percentage of Tottenville and the South Shore students excelling in math rose from 48% in 2000 to 65% in 2011, though reading achievement declined from 55% to 52% during the same time period.

Tottenville High School, a public school, was originally located in the neighborhood, but a new campus was opened approximately three miles to the north, in the neighborhood of Huguenot, in 1971 (Totten Intermediate School 34 or I.S. 34, an intermediate school, now occupies the original high school building). One of the area's oldest buildings is the old building of P.S.1 (the Tottenville School), dating from 1878, and is unique for its traditional sloped roof. Today it is still in operation, now served by a second, newer building as well, built in 1929. In 2000, a new elementary school, P.S.6 (the Corporal Allan F. Kivlehan School), was opened to serve eastern Tottenville's growing population, as well as other neighboring areas. Tottenville's local Catholic school was Our Lady Help of Christians School, which was run under Our Lady Help of Christians Parish. The school dates back to 1904. It was announced in February, 2019 that this school would close at the end of the 2018-2019 school year.

The New York Public Library (NYPL)'s Tottenville branch is located at 7430 Amboy Road. The one-story Carnegie library building was designed by Carrère and Hastings and opened in 1904. It is a New York City designated landmark.

All content from Kiddle encyclopedia articles (including the article images and facts) can be freely used under Attribution-ShareAlike license, unless stated otherwise. Cite this article:
Tottenville, Staten Island Facts for Kids. Kiddle Encyclopedia.