Copp's Hill Burying Ground is a historic cemetery in the North End of Boston, Massachusetts. Established in 1659, it was originally named "North Burying Ground", and was the city's second cemetery.

Several headstones from the 18th and 19th century in the cemetery.

The cemetery was founded on February 20, 1659, when the town bought land on Copp's Hill from John Baker and Daniel Turell to start the "North Burying Ground". Now named "Copp's Hill Burying Ground" (although often referred to as "Copp's Hill Burial Ground"), it is the second oldest cemetery in Boston (second only to the King's Chapel Burying Ground founded in 1630). It contains more than 1200 marked graves, including the remains of various notable Bostonians from the colonial era into the 1850s.

The first extension was made on January 7, 1708 when the town bought additional land from Judge Samuel Sewall and his wife Hannah. The land was part of a pasture which Mrs. Sewall had inherited from her father, John Hull, master of the mint.

Benjamin Weld and his wife Nabby sold the second extension to the town for $10,000 on December 18, 1809 soon after they had bought it from Jonathan Merry, who had used it as pasture. Ten years later, Charles Wells, later mayor of Boston, bought a small parcel of land from John Bishop of Medford and used this as a cemetery that was later merged with the adjacent North Burying Ground. Because of this complicated history, it is no longer possible to discern the original boundaries of the cemetery.

On the Snow Hill Street side are the many unmarked graves of the African Americans who lived in the "New Guinea" community at the foot of the hill. In addition to the graves there are 272 tombs, most of which bear inscriptions that are still legible.

By 1840 the cemetery had fallen into near disuse but the town continued to maintain the site intermittently. By 1878 it was badly neglected. The cemetery was not an official stop on the Freedom Trail when it was created in 1951 but it has since been added and is much-frequented by tourists and photographers. The site was added to the National Register of Historic Places in 1974. 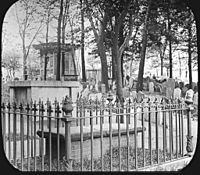 All content from Kiddle encyclopedia articles (including the article images and facts) can be freely used under Attribution-ShareAlike license, unless stated otherwise. Cite this article:
Copp's Hill Burying Ground Facts for Kids. Kiddle Encyclopedia.