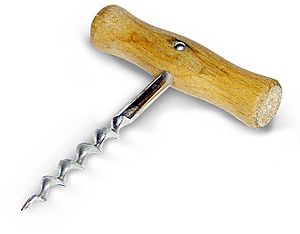 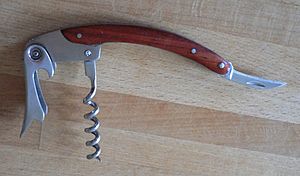 A 'waiters friend' or sommelier's knife.

A corkscrew is a tool which is used to open wine bottles. It is inserted into the cork and used to pull the cork out of the wine bottle. Corkscrews are needed because the cork cannot be gripped otherwise.

In 1732 an anonymous poem shows just how far a man was willing to go to open a bottle of wine:

With the popularity of wine today, a corkscrew is a common item in kitchens, pubs (bars) and restaurants. It takes between 50 and 100 pounds of force to remove a cork from a wine bottle.

The basic design of a corkscrew is been based on a tool called a gun worm. This was used by a musketeer to remove an unfired bullet from a musket's barrel. In the 1800s, many manufacturers that made gun worms also made corkscrews. The first patented corkscrew in England was by Samuel Henshall in 1795. In 1883 a flat, lever-style corkscrew called the waiter's friend was invented in Germany by Karl Wienke. It is commonly used in restaurants today.

All content from Kiddle encyclopedia articles (including the article images and facts) can be freely used under Attribution-ShareAlike license, unless stated otherwise. Cite this article:
Corkscrew Facts for Kids. Kiddle Encyclopedia.