Coryphopteris simulata, synonym Thelypteris simulata, is a species of fern native to the Northeastern United States. It is known by two common names: bog-fern and Massachusetts fern. It is often confused with the silvery spleenwort, New York fern, and the marsh fern due to similarities in shape and size.

Coryphopteris simulata is bright green in color. The frond has some variation in shape, but it is around 61 cm (24 in) long, and its stalk is long and slender at 20.3 cm (8 in). The stalks are thin and slightly scaly, or hairy. The upwards portion is yellow-green in color, and the base is a light brown color.

The leaves are monomorphic and pinnately compounded; they can be between 10–40 cm (3.9-15.7 in) long and 7.6-15.3 cm (3–6 in) wide. The branching pattern appears to be opposite, but upon close observation it is clearly a slight alternate pattern. The leaf veins are for the most part unbranched, although some branching can be seen towards the lower part of the blade. 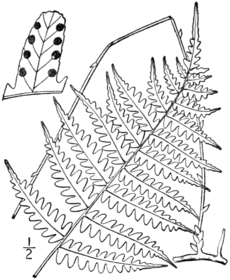 The rhizome is slender and black with some scales. It spreads out far and has a lot of branching. Older roots are short, black, thin, and wiry. There are many young, hairlike rootlets.

Coryphopteris simulata is a forb/herb perennial. The shoot system sprouts up from a rhizome, which is typically an underground root, but is sometimes found at the ground level. The leaves die and fall off during the wintertime. Spores are produced in the summertime.

The species was first described by George Edward Davenport in 1894 as Aspidium simulatum (in the same publication he also suggested that "those persons who reject Aspidium" could use the synonym Nephrodium simulatum). Genus boundaries in the family Thelypteridaceae have been subject to regular changes; the species has also been placed in Thelypteris (1910), Parathelypteris (1976) and more recently Coryphopteris (2018). As of January 2020[update], Plants of the World Online accepted the placement in Thelypteris, while the Checklist of Ferns and Lycophytes of the World accepted the placement in Coryphopteris.

One distinguishing feature is the sweet-smelling fragrance it emits. Since it has similarities to the marsh fern, New York fern, and silvery spleenwort, people often fail to notice its existence, and have difficulty distinguishing it from the other similar ferns. There is still some confusion today, as this species is relatively uncommon and its shape can be variable.

Coryphopteris simulata grows in shaded, marshy wetlands and bog areas such as cedar, spruce, larch, and sphagnum swamps. It likes to grow among bryophytes, which protect the plant from the sun and provide it with a shady area. It prefers and is most often found in moist, acidic soil that is soft and spongy.

All content from Kiddle encyclopedia articles (including the article images and facts) can be freely used under Attribution-ShareAlike license, unless stated otherwise. Cite this article:
Coryphopteris simulata Facts for Kids. Kiddle Encyclopedia.