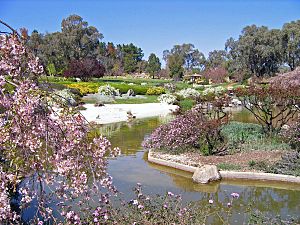 The Cowra Japanese Garden and Cultural Centre is located in the town of Cowra, in the Central West region of New South Wales, Australia. The 5 ha (12 acres) garden was established to recognize and develop the historic and ongoing relationship between the people of Cowra Shire and the people of Japan.

The garden was designed by Ken Nakajima (1914–2000) in the style of the Edo period as a kaiyū-shiki or strolling garden. The rocky hillside, manicured hedges, waterfalls, streams, and lakes provide a serene environment for a variety of aquatic birds. Special features of the garden include a Bonshō (bell), a traditional Edo cottage, an authentic open air tea house, and a Bonsai house.

In 1960 the Japanese Government decided to bring all their war dead from other parts of Australia to be re-buried at Cowra, which already featured a cemetery for the remains of 231 Japanese soldiers killed during the 1944 Cowra breakout from the nearby prisoner of war camp. The Japanese War Cemetery was maintained after World War II by members of the Cowra Returned and Services League of Australia, and ceded to Japan in 1963.

In 1971 Cowra Tourism Development decided to celebrate this link to Japan, and proposed a Japanese garden for the town. The Japanese government agreed to support this development as a sign of thanks for the respectful treatment of their war dead, with the development also receiving money from the Australian government and private entities.

An annual Sakura Matsuri (cherry blossom festival) is held in the gardens during September and celebrates the arrival of spring.

All content from Kiddle encyclopedia articles (including the article images and facts) can be freely used under Attribution-ShareAlike license, unless stated otherwise. Cite this article:
Cowra Japanese Garden and Cultural Centre Facts for Kids. Kiddle Encyclopedia.