Cradock is a settlement 320 kilometres north of Adelaide on the Hawker to Orroroo Road in South Australia. The nearest town with a greater population is Hawker which is approximately 20 km away with a population of around 360. Cradock is in the Flinders Ranges Council area, the state Electoral district of Stuart and the federal Division of Grey. The southern part of the locality is in the electoral district of Stuart and District Council of Orroroo Carrieton.

After the South Australian government permitted settlers to go into the semi-arid lands north of Goyder's Line Cradock was established in 1879 on a 'grassy flat' of 'strong red loam', by the Wirreanda Creek. Cradock takes its name from the then Governor of South Africa, Sir John Cradock.

Soon after settlement a school, police station, two hotels, two blacksmith shops and a saddler were operating in Cradock. The "wheat rush" was followed by the failure of four years of crops which led to an increasing despair and a loss of many of the town’s population.

Cradock had three churches. The stone Catholic church opened in 1883. The Wesleyan Methodist church built in 1884 was weatherboard and iron, replaced by a stone church (construction started in 1924) which was used into the 1980s, but is now a private residence. The stone Anglican church built in 1894 was used until 1958 and is also now a private residence.

The village still has one hotel, the Cradock Hotel. 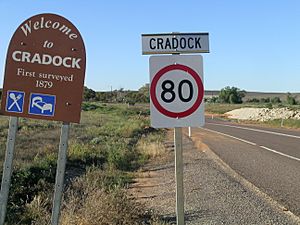 Signs at the outskirts of town.

All content from Kiddle encyclopedia articles (including the article images and facts) can be freely used under Attribution-ShareAlike license, unless stated otherwise. Cite this article:
Cradock, South Australia Facts for Kids. Kiddle Encyclopedia.