Craigmillar (Scottish Gaelic: Creag a' Mhuilleir, IPA:[ˈkʰʲɾʲekˈaˈvɯʎɪɾʲ]), from the Gaelic Creag Maol Ard, meaning 'High Bare Rock', is an area of Edinburgh, Scotland, about 3 miles (4.8 km) south east of the city centre, with Duddingston to the north and Newcraighall to the east. 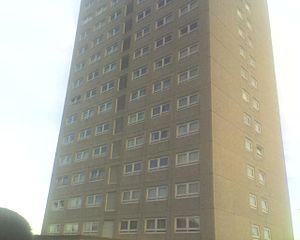 Despite the relative modernity of most of the housing in the area, the settlement of Craigmillar itself is very old, and contains Craigmillar Castle, which was begun in the late 14th or early 15th century, and occupied until the early 18th century. In 1660, the Craigmillar estate was bought by Sir John Gilmour.

The housing scheme at Niddrie Mains was created through the Housing (Scotland) Act of 1924, with lands bought from the Wauchope Estate. The area was designed and laid out by the then City Architect, Ebenezer James MacRae from 1927. The Craigmilllar estate, immediately below the castle, was planned in 1936. Until around 2008, the area consisted mainly of inter-war and post-war public housing schemes, ranging from private bungalows to Edinburgh Council-owned high rise tower blocks. The City of Edinburgh Council is now well into a regeneration programme which has seen the demolition of the earlier estates and the area has benefited from many initiatives aimed at tackling the social deprivation that has characterised the area for many years.

The late 19th and early 20th centuries saw seven breweries being built in what was open country at Craigmillar/Duddingston, concentrated in a small area beside the railway line and taking advantage of the local aquifers providing excellent water for brewing. The first of these was the Craigmillar Brewery of William Murray & Co. Ltd built in 1886 and followed within a few years by Andrew Drybrough's brewery, also called the Craigmillar Brewery (1892), the Duddingston Brewery built by Pattisons Ltd (1896), bought by Robert Deuchar Ltd in 1899 following Pattisons' liquidation, the North British Brewery (1897) which was taken over by Murray's in 1927 becoming known as Murray's No. 2 Brewery, Maclauchlan's Castle Brewery, Raeburn's New Craigmillar Brewery and Paterson's Pentland Brewery, all opening in 1901. These breweries stopped brewing at various times, mainly in the 1960s, but Drybrough's survived for several years and ceased brewing in January 1987.

Craigmillar saw riots in the 1980s, amid complaints about the lack of facilities in the area. Both the library and Arts Centre were won by grassroots-based community action trying to tackle the area's social problems. One such venture was the Craigmillar Festival Society, which was active from 1962 until 2002.

The area also had a large concrete sculpture/play-structure, created by artist Jimmy Boyle called Gulliver, The Gentle Giant that cares and shares. It was built for the Craigmillar Festival Society in 1976, and demolished in 2011 when the Niddrie Burn was re-routed through Hunter's Hall Park. The University of Edinburgh has playing fields in this area, including one of the oldest modern-style shinty fields in Scotland.

Gulliver was considered a geoglyph.

An ambitious plan to re-develop parts of Craigmillar is currently underway. The Scottish Government's "Green Quarter Plan" proposes the creation of several new parks and woodland areas throughout the Craigmillar area. The "Green Quarter Plan" is being undertaken by the Parc life development company. They also propose the development of 3,200 affordable houses to rent and improved learning and leisure facilities for young people.

One of the few retained buildings of significance is "The White House" former public house, an Art Deco listed building which was restored with gallery space inside in 2011. 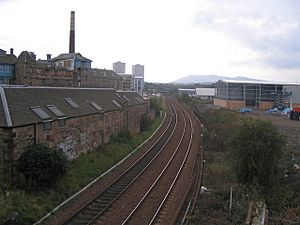 The area was once served by a local railway from Duddingston & Craigmillar railway station on the Edinburgh Suburban and Southside Junction Railway. The station closed in 1962, but local pressure groups are campaigning to have the line re-opened, possibly as an extension of the forthcoming Edinburgh Tram Network. Following a petition submitted to the Scottish Parliament in 2007, the proposal was rejected in 2009 by transport planners due to anticipated cost.

All content from Kiddle encyclopedia articles (including the article images and facts) can be freely used under Attribution-ShareAlike license, unless stated otherwise. Cite this article:
Craigmillar Facts for Kids. Kiddle Encyclopedia.