Cruciata laevipes is a species of flowering plant in the family Rubiaceae. It is commonly known as crosswort, smooth bedstraw or Luc na croise in Gaelic. The Latin epithet laevipes refers to the smooth stalk.

This perennial sprawling plant can grow to a height of 15–70 cm (6–28 in), spreads by seeds and stolons and has, unusually amongst this group, yellow hermaphrodite flowers. The inner flowers are male and soon fall off, whilst the outer are bisexual and produce the fruit. The flowers smell of honey. Of the whorls of four leaves, only two in each group are real leaves, the other two being stipules. It is associated with arbuscular mycorrhiza that penetrate the cortical cells of the roots. In the United Kingdom it flowers April to June. Pollination is by bees and flies. 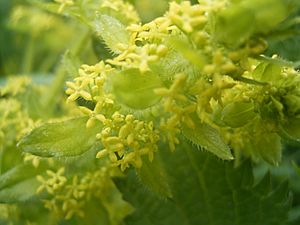 Cruciata laevipes is little used in herbal medicine today, but it was once recommended as a remedy for rupture, rheumatism and dropsy. Bald's Leechbook recommended crosswort as a cure for headaches.

All content from Kiddle encyclopedia articles (including the article images and facts) can be freely used under Attribution-ShareAlike license, unless stated otherwise. Cite this article:
Cruciata laevipes Facts for Kids. Kiddle Encyclopedia.