Cryptolaemus montrouzieri is endemic to Queensland and New South Wales, Australia. It is now also present in southern Europe (France, Italy, Spain, Greece), in North Africa, in the Afrotropical realm, in the Nearctic realm, and in the Neotropical realm. 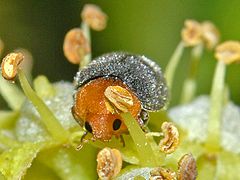 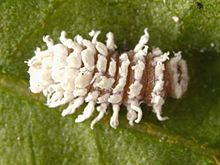 Cryptolaemus montrouzieri can reach a length of about 6 millimetres (0.24 in). Adults of this species have the typical ladybird shape but, unlike many of the often brightly coloured Coccinellidae, the elytra of these small ladybirds are predominantly dark brown and have no spots. Head, antennae, pronotum, the end of the elytra and the legs are orange-brown. Larvae can reach a length of 14–15 millimetres (0.55–0.59 in). They show a waxy covering that makes them apparently look like the mealybugs they prey on, a case of aggressive mimicry.

The adults and larvae of these insects eat scale insects, especially mealybugs. Females lay their eggs among the egg sack of mealybugs. Larvae feed on mealybug eggs, young crawlers and their honeydew. They become adults in 24 days, after three larval stages and a pupal stage. The life span lasts two months.

All content from Kiddle encyclopedia articles (including the article images and facts) can be freely used under Attribution-ShareAlike license, unless stated otherwise. Cite this article:
Cryptolaemus montrouzieri Facts for Kids. Kiddle Encyclopedia.