Crystal City is a city in and the county seat of Zavala County, Texas, United States. The population was 7,138 at the 2010 census. It was settled as a farming and ranching community and was a major railroad stop being 110 miles (180 km) from San Antonio. Spinach became a major crop and the city has promoted itself as "Spinach Capital of the World." During World War II, a large internment camp was located here. The town is also noteworthy in the history of Mexican American political self-determination for the founding of the La Raza Unida Party. 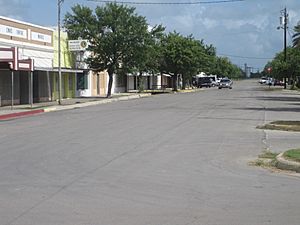 A view of downtown Crystal City

Crystal City was originally settled by American farmers and ranchers producing cattle and various crops. Crystal City was a major stop along with San Antonio, Uvalde, Carrizo Springs, and Corpus Christi on the defunct San Antonio, Uvalde and Gulf Railroad, which operated from 1909 until it was merged into the Missouri Pacific Railroad in 1956. From 1909 to 1912, the SAU&G was known as the Crystal City and Uvalde Railroad. There was also an eastern link to Fowlerton near Cotulla in La Salle County. The remaining San Antonio-to-Corpus Christi route is now under the Union Pacific system.

The successful production of spinach evolved into a dominant industry. By March 26, 1937, the growers had erected a statue of the cartoon character Popeye in the town because his reliance on spinach for strength led to greater popularity for the vegetable, which had become a staple cash crop of the local economy. Early in its history, the area known as the "Winter Garden District" was deemed the "Spinach Capital of the World" (a title contested by Alma, Arkansas). The first Spinach Festival was held in 1936. It was put on hold during World War II and later years. The Festival was resumed in 1982. The Spinach Festival is traditionally held on the second weekend in November, and draws former residents (many of them former migrant farm workers) from Michigan, Wisconsin, Minnesota, California, Washington State, and beyond.

During World War II, Crystal City was home to the largest of the World War II internment camps, having housed American civilians of German, Japanese, and Italian ancestry. 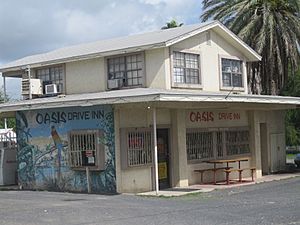 With the stream of refugees fleeing the Mexican Revolution of 1910, and later added to by Mexican migrant workers lured by the local spinach industry, the demographics of the small rural city began to shift over the years since its 1910 incorporation, due to its proximity to the U.S./Mexico border. By 1963, Crystal City experienced a tumultuous Mexican American electoral victory, as the swiftly emerging Mexican American majority elected fellow Mexican American to the city council, led by Juan Cornejo, a local representative of the Teamsters Union at the Del Monte cannery in Crystal City. The newly elected all Mexican American city council, and the succeeding administration, had trouble governing the city because of political factions among the new officials. Cornejo was selected mayor from among the five new council members. His quest for control of the city government eventually led to his loss of political support. Although these five elected officials known as "Los Cinco" only held office for two years, many consider this moment the "spark" or starting point of what became known as the Chicano Movement. A new group made up of both Anglos and Mexican Americans, the Citizens Association Serving All Americans, announced its plans to run candidates for countywide offices in 1964, and won.

By the late 1960s, Crystal City would become the location of continued activism in the civil rights movement among its Mexican American majority population, and the birthplace of the third party political movement known as La Raza Unida Party founded by three Chicanos, including José Ángel Gutiérrez over a conflict about the ethnicity of cheerleaders at Crystal City High School. 200 Mexican American students went out on strike with their parents' support. La Raza Unida, and related organizations, then won election to most offices in Crystal City and Zavala County in the periods between 1969 and 1980, when the party declined at the local level.

In the 1970s, following protests of charges (essentially non-payment of services) on the part of La Raza Unida, Crystal City's natural gas supply was shut off by its only supplier. Crystal City residents were forced to resort to mostly wood burning stoves and individual propane gas tanks for cooking. To this day, there is no natural gas supplier in the Crystal City area, although most residents purchase propane from the city. 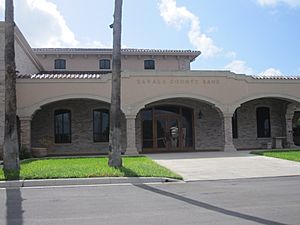 In 1976, eleven officials in Crystal City were indicted on various counts. Angel Noe Gonzalez, the former Crystal City Independent School District superintendent who later worked in the United States Department of Education in Washington, D.C., upon his indictment retained the San Antonio lawyer and later mayor, Phil Hardberger. Gonzalez was charged with paying Adan Cantu for doing no work. Hardberger, however, documented to the court specific duties that Cantu had performed and disputed all the witnesses called against Cantu. The jury unanimously acquitted Gonzalez. Many newspapers reported on the indictments but not on the acquittal. John Luke Hill, the 1978 Democratic gubernatorial nominee, had sought to weaken La Raza Unida so that he would not lose general election votes to a third party candidate. Victory, however, went not to Hill but narrowly to his successful Republican rival, Bill Clements. Compean received only 15,000 votes, or 0.6 percent, just under Clements's 17,000-vote plurality over Hill.

In February 2016, almost every top official of the city was arrested under a federal indictment accusing them of taking bribes from contractors and providing city workers to assist an illegal gambling operator, Ngoc Tri Nguyen. Mayor Ricardo Lopez, city attorney William Jonas, Mayor Pro Tem Rogelio Mata, council member Roel Mata. and former council member Gilbert Urrabazo. A second councilman, Marco Rodriguez was already charged in a separate case with smuggling Mexican immigrants. A week earlier Lopez was taken into custody for assault and disorderly conduct during a city council meeting in which a recall election to remove himself and two other city council members was discussed. In December, Jonas surrendered to authorities after being charged with assault for allegedly manhandling an elderly woman who was trying to enter a city council meeting. That left one councilman free of federal charges.

According to the United States Census Bureau, the city has a total area of 3.6 square miles (9.4 km²), all of it land. Major bodies of water near Crystal City include the Nueces River and Averhoff Reservoir. Soils are well drained reddish brown to grayish brown sandy loam or clay loam of the Brystal, Pryor and Tonio series; the Brystal is neutral to mildly alkaline and the other two tend to be moderately alkaline.

There were 2,183 households out of which 43.2% had children under the age of 18 living with them, 51.9% were married couples living together, 25.1% had a female householder with no husband present, and 18.4% were non-families. 16.9% of all households were made up of individuals and 9.7% had someone living alone who was 65 years of age or older. The average household size was 3.25 and the average family size was 3.67.

All content from Kiddle encyclopedia articles (including the article images and facts) can be freely used under Attribution-ShareAlike license, unless stated otherwise. Cite this article:
Crystal City, Texas Facts for Kids. Kiddle Encyclopedia.