Kids Encyclopedia Facts
Not to be confused with Cushetunk, New Jersey.

Cushetunk Mountain (formerly Mount Ployden and Pickel's Mountain occasionally Mount Cushetunk or Coshanton) is a ring shaped mountain in the U.S. state of New Jersey, located in Readington and Clinton Township in Hunterdon County. The Lenape Native Americans called the mountain "Cushetunk" meaning "place of hogs" after the wild hogs found there. In the 1960s, the valley at the heart of the mountain was dammed and filled with water to create Round Valley Reservoir. Today, the mountain and its accompanying lake act as a vital water supply to Central New Jersey, while at the same time providing numerous recreational opportunities to the region.

Before the arrival of Europeans, Cushetunk Mountain was inhabited by Unami speaking Lenape, particularly the Musconetcongs who ranged between Cushetunk Mountain and Sourland Mountain to the south. An interesting claim put forward by Beauchamp Plantagenet, one of the first Europeans to explore the area around the mountain, states that a Native American king held his seat in a place resembling the valley formed by Cushetunk Mountain. The claim exists today as a legend, and no evidence has ever been found confirming Plantagenet's story of a ‘Raritan king’.

Two famous names from New Jersey's colonial history owned land on the north slope of Cushetunk Mountain in Potterstown (part of Readington and Clinton Township). One was John Stevens, a delegate to the Continental Congress, whose grandson founded Stevens Institute of Technology. The other was Lord Stirling, an American Revolutionary War General who was ranked 3rd or 4th behind George Washington.

Historically, wildlife at the mountain included apex predators that are no longer found in the region. A story from the colonial era involving Dr. John Rockhill, a member of the Society of Friends and supposedly Hunterdon's County's first physician, indicates that Cushetunk Mountain and neighboring Round Mountain were known to harbor wolves. It is also noted that settlers in nearby Flemington had to defend against these wolves during the winter.

Prior to the 1960s, when the valley surrounded by Cushetunk Mountain was dammed to form Round Valley Reservoir, the mountain was useful as a timber source. Farming use was limited due to the hard diabase rock in the mountain's soil.

A unique feature of Cushetunk Mountain's geology is that the igneous intrusion forming the mountain partly overlaps Paleozoic limestone west of the Ramapo Fault. Occurring just south of Molasses Hill Rd in Clinton Township, the overlap is significant for two reasons. First, the overlap marks one of the only locations in the Newark Basin where an intrusion successfully crossed the Ramapo fault and effectively spilled over the western edge of the basin. Second, the trap rock comprising the intrusion at this location is fine grained and unlike the dense, coarse diabase common to Cushetunk Mountain. It is thought that this is because the intrusion erupted to the surface as it overran the Paleozoic limestone. 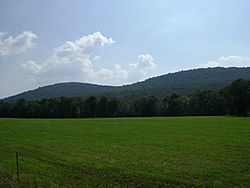 The northeast slope of Cushetunk Mountain

While most of the mountain ridges in New Jersey run generally north to south, Cushetunk Mountain primarily has an east-west ridge orientation because of the elongated north and south prongs of its horseshoe-like ridge. This produces significantly different microclimates between the north facing and south facing slopes of the mountain. On south facing slopes, the air temperature near the ground is consistently higher than on the north facing slopes, which do not receive as much sunlight. In terms of ecology this creates a noticeable impact on Cushetunk Mountain's vegetation.

Because the north slope of the mountain is cooler and shaded, moisture is more easily retained. This results in larger trees, as well as the growth of trees not seen on southern facing slopes. These trees include black birch, tulip tree, white ash, basswood, hickory, beech, and sugar maple. Shrubs are abundant in the understory of the northern slopes, as well as herbs typical of more northern forests, including wild ginger, wild sarsaparilla, black snakeroot, and columbine.

On the warmer, dryer southern slopes chestnut oak and red oak prevail, although the trees are also common to the northern slopes. In the understory, dogwood is dominant, and the diversity and number of shrubs is reduced. Grasses and sedges are the most prevalent ground cover.

Wildlife supported by Cushetunk Mountain includes a variety of woodland birds, including a nesting pair of bald eagles. Groundwater seeps, particularly on the northern slopes, provide habitat to amphibians, while outcrops of trap rock offer ideal environments for small reptiles.

All content from Kiddle encyclopedia articles (including the article images and facts) can be freely used under Attribution-ShareAlike license, unless stated otherwise. Cite this article:
Cushetunk Mountain Facts for Kids. Kiddle Encyclopedia.