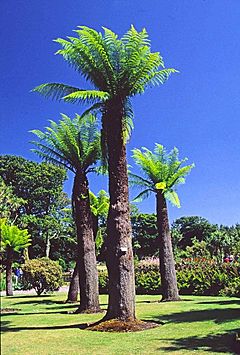 Tree ferns are a large group of ferns with tree-like form. They are part of a subclass of ferns which is proved to be monophyletic by DNA sequence analysis.

The tree-ferns and some other ferns with creeping rhizome stems make up the Cyatheales group of ferns (as a sub-class or order). The tree-like habit has evolved a number of times in this group. They can grow up to 20 metres tall, with their large fronds at the top.

Tree ferns are found growing in tropical and subtropical areas as well as temperate rainforests in Australia, New Zealand, and other island groups nearby. A few genera extend further, such as Culcita in southern Europe. Like all ferns, tree ferns reproduce by means of spores developed in sporangia on the undersides of the fronds.

Unlike flowering plants, tree ferns do not form new woody tissue in their trunk as they grow. Rather, the trunk is supported by a fibrous mass of roots that expands as the tree fern grows.

It is not certain how many species of tree fern there are but it is likely to be around a thousand. New species are discovered in New Guinea with each botanical survey. Many species must have become extinct in the last century as forest habitats were cut down by people.

All content from Kiddle encyclopedia articles (including the article images and facts) can be freely used under Attribution-ShareAlike license, unless stated otherwise. Cite this article:
Tree fern Facts for Kids. Kiddle Encyclopedia.