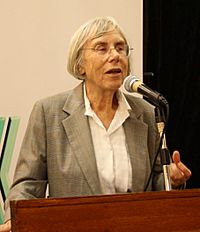 Dalia Dorner (Hebrew: דליה דורנר; born March 3, 1934) is an Israeli law professor. She was a Justice of the Supreme Court of Israel, serving from 1993 to 2004. She was born in Istanbul, Turkey.

Dorner became a District Court Judge, first in the Southern District and later in the Jerusalem District. She was one of the judges who convicted John Demjanjuk and sentenced him to death in 1988, a decision overturned by Israel's Supreme Court, in 1993.

All content from Kiddle encyclopedia articles (including the article images and facts) can be freely used under Attribution-ShareAlike license, unless stated otherwise. Cite this article:
Dalia Dorner Facts for Kids. Kiddle Encyclopedia.