Dalmatia Creek is a tributary of the Susquehanna River in Northumberland County, Pennsylvania, in the United States. It is approximately 2.8 miles (4.5 km) long and flows through Lower Mahanoy Township. The watershed of the creek has an area of 2.80 square miles (7.3 km2). The creek has no named tributaries, but several unnamed ones. Both it and its tributaries are designated as impaired waterbodies due to sedimentation/siltation from crop-related agriculture and vegetation removal. Streambank erosion also occurs in the watershed. The creek is in the Ridge and Valley physiographic province.

The main land use in the watershed of Dalmatia Creek is agricultural land, but forested land, low-intensity development, and transitional land are also present. The creek experienced flooding during Tropical Storm Agnes in 1972. A bridge carrying Pennsylvania Route 147 has been constructed across it in Dalmatia. The drainage basin of the creek is designated as a Warmwater Fishery and a Migratory Fishery. 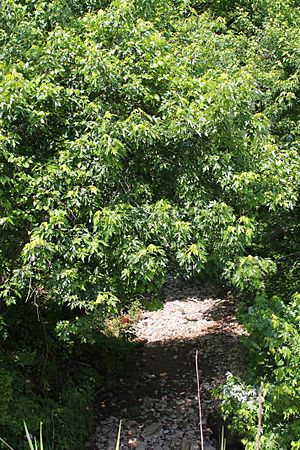 Dalmatia Creek has no named tributaries. However, it does have seven unnamed tributaries. They are known as Unt 17500, Unt 17501, Unt 17502, Unt 17503, Unt 17504, Unt 17505, and Unt 17506. All of these streams are designated as impaired waterbodies for the same reasons as the main stem. Some tributaries suffer from little riparian buffering, or even none at all, and at least one has been plowed over. However, a tributary in the creek's upper reaches has some riparian buffering, reduced erosion, and relatively stable streambanks.

Dalmatia Creek is designated as an impaired waterbody. The cause of impairment is sedimentation/siltation and the probable sources of impairment are crop-related agriculture and removal of vegetation.

Dalmatia Creek has been described as "a minute stream" and "barely a trickle" in A. Joseph Armstrong's 2000 book Trout Unlimited's Guide to Pennsylvania Limestone Streams.

Dalmatia Creek is in the Ridge and Valley physiographic province. The slopes in the watershed generally have a low gradient. This, combined with the lack of vegetation in agricultural areas, causes excessive runoff during precipitation events. Unprotected stream banks in the watershed lead to stream bank erosion and slumping. The banks are also undercut and/or deteriorated in some reaches; they are described as "deteriating [sic] and slumping" at the headwaters. There are also excessive sediment deposits in the creek.

The dominant hydrologic soil group in the watershed of Dalmatia Creek is B. The dominant surface geology is schist, a metamorphic rock, which underlies the entire watershed. The surface geology has little influence on the sediment loads in the creek. The natural fluvial geomorphology is channelized in some reaches. cobbles of chert of varying sizes have been observed on the eastern bank of the Susquehanna River, not far from the creek.

Dalmatia Creek is entirely within Lower Mahanoy Township, as are all of its tributaries. There are approximately 5.0 miles (8.0 km) of streams in the watershed. 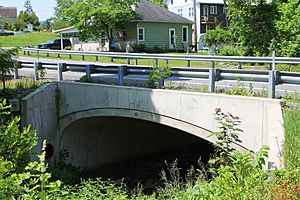 A concrete culvert bridge carrying Pennsylvania Route 147 was constructed across Dalmatia Creek in 2011 in Dalmatia and is 27.9 feet (8.5 m) long.

In July 2012, the Lower Mahanoy Township Municipal Authority received a Water Obstructions and Encroachments permit to built, maintain, and operate an elevated platform for the control panel of the Dalmatia Creek grinder Pump Station near Dalmatia Creek itself. In August 2012, the Pennsylvania Department of Environmental Protection invited comments on its proposed Total Maximum Daily Load plan for Dalmatia Creek. However, no public comments were received.

The drainage basin of Dalmatia Creek is designated as a Warmwater Fishery and a Migratory Fishery. The creek's designated use is aquatic life. In 2016, the Pennsylvania Fish and Boat Commission passed regulations affecting Dalmatia Creek from its mouth to a point 0.5 miles (0.80 km) upstream. This regulation forbade any attempt to target or catch bass between May 1 and June 17, with immediate catch and release being in effect for bass the rest of the year. However, the creek is not a trout fishery.

The riparian buffers of Dalmatia Creek are limited or nonexistent in agricultural areas. Cropland mowing occurs right up to the creek's banks in some areas. Additionally, livestock have access to the creek, and barn waste is flushed into the headwaters.

All content from Kiddle encyclopedia articles (including the article images and facts) can be freely used under Attribution-ShareAlike license, unless stated otherwise. Cite this article:
Dalmatia Creek Facts for Kids. Kiddle Encyclopedia.