Danquart Anthon Weggeland (March 31, 1827 – June 2, 1918) is considered the "Father of Utah Art" and was an artist and teacher in the early history of Utah Territory.

Weggeland was born in the city of Kristiansand, Norway. At age sixteen, he began studying with a portrait painter in Christiania and at age 20 he went to Copenhagen, where he eventually studied at the Danish Royal Academy of Art. 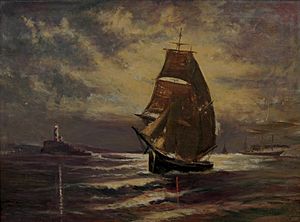 After two years in Copenhagen, Weggeland returned to Christiania, where he worked as a portrait painter and did some work for theatres.

In 1854, he was introduced to The Church of Jesus Christ of Latter-day Saints (LDS Church), and one of his main teachers was a missionary who had also attended the Royal Academy of Art, C. C. A. Christensen. After being baptized a member of the LDS Church, Weggeland moved to England. He served as a church missionary in England from 1857 to 1861. He then went to New York City where he studied with Daniel Huntington and George Peter Alexander Healy.

In 1862, Weggeland went on to Florence, Nebraska, from which he left in August for Utah Territory. Weggeland journeyed to Utah in the Henry W. Miller Company of Mormon pioneers. Weggeland made sketches on his journey to Utah.

During his early days in Utah Territory, Weggeland would occasionally trade a painting for a pair of well-knit socks.

Weggeland's first major artistic work in Utah was his joint commission with C. C. A. Christensen to do a series of paintings from the Bible and Book of Mormon. This commission came from Dimick B. Huntington.

Weggeland did murals for the St. George, Manti, Logan and Salt Lake Temples of the LDS Church. He had also served as an art instructor to most of the church's art missionaries before they went to France.

All content from Kiddle encyclopedia articles (including the article images and facts) can be freely used under Attribution-ShareAlike license, unless stated otherwise. Cite this article:
Dan Weggeland Facts for Kids. Kiddle Encyclopedia.