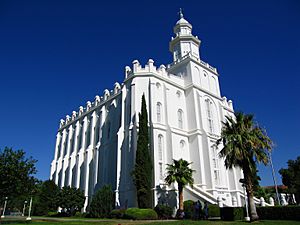 The St. George Temple from its southeast corner

The building is located in the southwestern Utah city of St. George. It was designed by Truman O. Angell and is more similar in its design to the Nauvoo Temple than to later LDS temples. The St. George Temple is the oldest temple still actively used by the LDS Church. The temple currently has three ordinance rooms and 18 sealing rooms, and a total floor area of 110,000 square feet (10,200 m2). The St. George Utah Temple was the first temple where Saints could receive all temple ordinances for their ancestors.

A temple in St. George was announced on November 9, 1871 by Brigham Young and was dedicated in 1877. Even though the Salt Lake Temple had been announced and commenced years earlier (1847 and 1853), construction on that temple was not completed until 1893. The St. George Temple was built to satisfy the church's immediate need for an appropriate place for temple ceremonies and ordinances. Because of the pressing need, the building's groundbreaking ceremony was held on the day the temple was announced. It was the third to be completed by the church and the first one in Utah.

Young chose a 6-acre (24,000 m2) plot as the temple site. Builders soon discovered that the chosen site was swampy with numerous underground streams. Young was consulted on moving the site, but he remained firm in the idea that this was the site for the temple. To deal with the swampy site, workers created drains to eliminate as much water as possible. Then they brought lava rock to the site and crushed it into a gravel to create a dry foundation for the temple. This led to a new problem: how to crush the rock. Someone suggested using an old cannon that the city had acquired. The old cannon was made in France and used by Napoleon during his siege on Moscow. During Napoleon’s hasty retreat, however, the cannon was left behind. It was later dragged to Siberia, then Alaska, and finally ended up at a fort in California. Members of the Mormon Battalion acquired the cannon, had it mounted on wheels, and brought it to Utah. Today, the old cannon is displayed on the St. George temple grounds. After creating a pulley system, the cannon was used as a pile driver to compact the lava rock and earth and create a firm foundation.

After stabilizing the foundation, work began on the structure. The walls of the temple were built of the red sandstone common to the area and then plastered for a white finish. Local church members worked for over five and a half years to complete the temple. Historians James Allen and Glen Leonard made note of the dedication shown by the pioneers in Southern Utah. The workers opened new rock quarries, cut, hauled and planed timber, and donated one day in ten as tithing labor. Some members donated half their wages to the temple, while others gave food, clothing and other goods to aid those who were working full-time on the building. Women decorated the hallways with handmade rag carpets and produced fringe for the altars and pulpits from Utah-produced silk. It was originally designed with two large assembly halls like the earlier Kirtland and Nauvoo Temples. The lower Assembly Hall was partitioned with curtains to provide the ordinance rooms for the Endowment Ceremony. At its completion, it contained 1,000,000 board feet (2,000 m3) of lumber, which had been hand-chopped and hauled between 40 and 80 miles (60 and 100 km). They also used 17,000 tons of volcanic rock and sandstone, hand-cut and hauled by mule teams.

In honor of the temple, the church's April 1877 General Conference was held there. The temple dedication ceremony took place on April 6, 1877. Young presided and Daniel H. Wells, his second counselor, gave the dedicatory prayer. The St. George Temple was the only temple completed while Young was president. Shortly after the dedication and the conference, Young returned to Salt Lake and died on August 29, 1877, at age 76.

In 1938, the lower Assembly Hall was rebuilt with permanent walls dividing it into four ordinance rooms. The four ordinance rooms were later changed into the present three rooms, at the time the endowment ceremony was changed from a live presentation to one presented on film. The cupola was replaced in 1883 after a lightning strike. Renovations were made in 1917, 1938 and 1975. The temple was closed for extensive remodeling in the 1970s and LDS Church president Spencer W. Kimball rededicated it on November 11, 1975.

As announced by the LDS Church on January 25, 2019, the temple closed on November 4, 2019 for renovations that are anticipated to be completed in 2022. Detailed information on the renovations were provided on May 22, 2019 and additions include a new brides’ plaza that will be added to the east side, a new baptistry entrance added on the south side, steel added to the original wood trusses of the temple, and a new heating and cooling system. Demolition crews removed the 20th-century additions to the north and west sides of the temple in February 2020.

Temple access is available to church members who hold a current temple recommend, as is the case with all operating Latter-day Saints temples. An adjacent visitors center is open to the public. An LDS Church meetinghouse is across the street on the East, which is also open to the public.

All content from Kiddle encyclopedia articles (including the article images and facts) can be freely used under Attribution-ShareAlike license, unless stated otherwise. Cite this article:
St. George Utah Temple Facts for Kids. Kiddle Encyclopedia.