The Brigham Young Winter Home and Office is a historic residence and museum located in St. George, Utah. Brigham Young was the foremost Mormon pioneer and led the church to the Utah Territory. As Young grew older, his arthritis precluded him from spending winters in the Salt Lake City region, so his followers built him a winter home in St. George in the arid Dixie region of Utah. Young seasonally occupied the home and office from 1873 to 1876. The building was eventually deeded to the division of Utah State Parks and Recreation and is now open as a museum.

Brigham Young was a tradesman from Whitingham, Vermont who converted to The Church of Jesus Christ of Latter-day Saints (the Church) in 1830. He joined with President of the Church Joseph Smith in 1832 and moved the Churches headquarters in Kirtland, Ohio. After the Church relocated to Nauvoo, Illinois, Smith named Young to the first Quorum of the Twelve Apostles and named him president of the group in 1839. In 1844, the residents of Nauvoo were split over the issue of plural marriage, leading to the arrest of Smith. A mob of men assassinated Smith while he was in jail, resulting in the succession crisis. 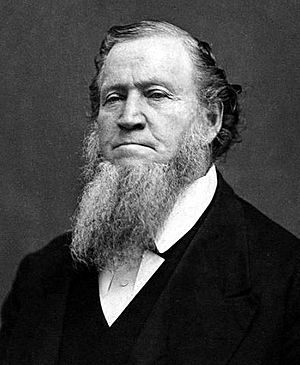 Brigham Young in 1870, three years before he started to use his winter home.

St. George was a commissioned settlement in Utah's Dixie. Intended to be a cotton-growing colony, the region was noted for its warm temperatures, even in winter. As Young aged, he found that warm weather helped his arthritis. St. George settlers built a home and office for Young in 1871, and he frequently spent his winters there after a front extension was added in 1873. Young's presence motivated the locals to complete the St. George Temple, which Young himself dedicated in 1877. Young died on August 29, 1877 and willed the land to Judd Gates, the local dentist. It was later abandoned until Georgius Cannon Young, a descendant of Brigham, purchased the lot and restored it. He deeded it to Utah State Parks and Recreation in 1959 and the house was again restored.

The house and office was designed by Miles Romney. An 1873 addition was designed by his son, Miles Park Romney. The house stands at two stories and is constructed with beige adobe brick. The red sandstone basement has two rooms, and the roof gable has wood shingles. Inside, the house has four fireplaces, three made of red sandstone and one from adobe. The church relocated all of Young's existing former furniture, some of which was built by Young himself, and added other period pieces to replace those lost. The office is east of the living quarters, featuring stucco walls and a sandstone chimney. Wood for the house was cut from the Mount Trumbull Wilderness and the Pine Valley Mountain Wilderness.

The Brigham Young Winter Home and Office was added to the National Register of Historic Places in 1971. It is located at the southeast corner of 100 West and 200 North and is open to the public as a museum.

All content from Kiddle encyclopedia articles (including the article images and facts) can be freely used under Attribution-ShareAlike license, unless stated otherwise. Cite this article:
Brigham Young Winter Home and Office Facts for Kids. Kiddle Encyclopedia.