Young was born in Kirtland, Ohio, the son of Brigham Young and Mary Ann Angell. Young's twin sister, Mary, died at age seven from the effects of injuries received at age two in a wagon accident. At age twelve, Young drove an ox cart along the Mormon Trail, reaching Salt Lake City in 1848. Young served as a guard and scout in the following years, operating in Salt Lake Valley and the surrounding canyons.

On November 15, 1855, Young married Catherine Curtis Spencer, a daughter of Orson Spencer, with exactly the same name as her mother.

In Utah Territory, Young became a member of the reconstituted Nauvoo Legion. He was involved in the rescue of the Willie and Martin companies of Mormon handcart pioneers. He also served in the Utah War with the troops that worked to halt the advance of Johnston's Army.

In 1861, Young was made a member of the Salt Lake Stake high council.

Early years as a general authority 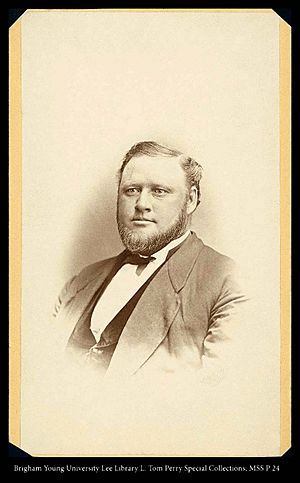 Brigham Young Sr. ordained three of his sons, Brigham Young Jr., Joseph Angell Young and John Willard Young, as apostles in 1864, without public announcement or adding them to the Quorum of the Twelve Apostles.

Unlike his brothers, Brigham Young Jr. would later become part of the Quorum of the Twelve Apostles four years later in 1868, after the death of Heber C. Kimball and George A. Smith joining the First Presidency. In 1868, he was also a Representative to the Territory of Utah Legislative Assembly. Young Jr. also served as a counselor to his father in the First Presidency of the church from April 8, 1873, until his father's death on August 29, 1877.

From 1862 to 1863, Young served as a church missionary in England, spending most of the time in London. During this time, he also accompanied Joseph F. Smith on a trip to Paris, France.

In 1864, Young returned to Europe, this time with his wife, Catherine (Orson Spencer's daughter), as his companion. He was an assistant to mission president Daniel H. Wells. In 1865, when Wells left for Utah, Young succeeded him as president of the European Mission. Brigham and Catherine's son, Joseph Angel Young II, was born in England in 1866 while he was still serving as mission president.

As president of the church's European Mission in 1866 and 1867, Young preached in France, Switzerland, Germany, Denmark, Sweden, Norway, Russia, the United Kingdom, and Ireland. Young also oversaw the emigration of British Latter-day Saints to Utah Territory. It was from a conversation as Young was about to return to Utah at the end of his time as mission president that Charles W. Penrose wrote the hymn, "Beautiful Zion For Me".

From October 1890 until February 1893 Young served for a second time as president of the European Mission. The mission was headquartered in Liverpool, and Young directly supervised missionary work in the British Isles, while also serving as a leader over the mission presidents of the various missions on the European continent.

Colonization and church assignment in America

In the western United States, Young was involved in the colonization of Cache Valley, southern Utah and the extension of Mormon settlements into New Mexico and Arizona. Young was also involved at times with the Mormon colonies in Mexico.

In 1867, Young was involved with the formation of the Deseret Sunday School Union to provide centralized direction to the Sunday schools of the church.

During 1868, Young acted as his father's agent in finding workers for the Utah portion of the First Transcontinental Railroad.

From 1869 until 1877, Young presided over the Latter-day Saints in Cache Valley, closely assisted by William B. Preston, who was serving as the regional presiding bishop. During this time, Young co-owned a feed and livery stable in Soda Springs, Idaho, with Solomon Hale.

In February 1883, Young went on a tour among the Navajo and Hopi peoples with many other church leaders, including Heber J. Grant.

In 1883, Young convinced the residents of Jonesville, Arizona, to rename it Lehi. It is today part of Mesa, Arizona.

Young practiced plural marriage. His first wife was Catherine Curtis Spencer. Among their children was Brigham Spencer Young, who would later serve as president of the Northwestern States Mission of the church.

In 1857, Young married his second wife, Jane Carrington, a daughter of Albert Carrington.

Young's wife Abigail Stevens was one of his younger wives. Their daughter Klara Young Cheney, born in Fruitland, New Mexico, in 1894, turned 100 years old in 1994. Abigail and Brigham Jr.'s last daughter, Marian Young, was also born at Fruitland on January 25, 1899. She died on November 22, 2004, less than two months short of her 106th birthday. She was the last grandchild of Brigham Young to die.

President of the Quorum of the Twelve Apostles 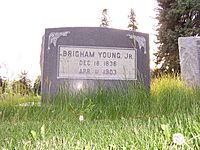 All content from Kiddle encyclopedia articles (including the article images and facts) can be freely used under Attribution-ShareAlike license, unless stated otherwise. Cite this article:
Brigham Young Jr. Facts for Kids. Kiddle Encyclopedia.