Star Valley is located in the United States between the Salt River Range in western Wyoming and the Webster Range of eastern Idaho. The altitude of the valley ranges from 5,600 feet (1,700 m) to 7,000 feet (2,100 m). Three major Wyoming rivers, the Salt River, the Greys River and the Snake River meet near Alpine Junction at Palisades Reservoir. Numerous towns are located in the valley, including Afton, Thayne, Bedford, Etna, Smoot, Fairview, Osmond, Freedom, Grover, Auburn, Alpine, Nordic, Turnerville and Star Valley Ranch. Star Valley was settled in the late 1870s by Mormon pioneers. Primary sources indicate Star Valley was proclaimed the "Star of All Valleys" for its natural beauty by a general authority of The Church of Jesus Christ of Latter-day Saints (LDS Church). The name was later shortened to Star Valley. Another less supported theory about the origin of the name comes from Starvation (Starve) Valley, a name the area gained during bitter winters in the late 1880s. In the March 1889, over 40 inches (100 cm) of snow fell in two days. 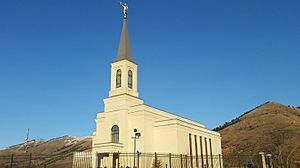 The Star Valley Wyoming Temple was completed in 2016

Star Valley was inhabited mainly by Shoshone Indians in the summer and fall months until the early 19th century. The natives were drawn to the valley for its abundant game and the pure salt deposits found near the present town of Auburn and also to the south of Afton, Wyoming there are more renowned salt deposits.

American explorers are known to have traveled through the area as early as 1812, seeking new routes to the West Coast. Canadian and American trappers followed, frequenting the area through the 1840s. The 1850s and 1860s saw many emigrants passing through the upper Star Valley area via the Lander Road on the Oregon Trail. White settlement of the area did not begin in earnest, though, until the late 1870s when LDS Apostles Moses Thatcher and Brigham Young, Jr. chose the valley for colonization. Archibald Gardner and members of his extended family arrived in 1889, building and operating five mills of various types in the valley.

On October 1, 2011, Thomas S. Monson, president of The Church of Jesus Christ of Latter-day Saints (LDS), announced in General Conference that the Star Valley Wyoming Temple would be built in the valley. The location of which was announced on May 25, 2012, to be just east of U.S. Highway 89 on Haderlie Farm property just south of Afton. The temple was completed and dedicated on October 30, 2016 by LDS Apostle David A. Bednar.

All content from Kiddle encyclopedia articles (including the article images and facts) can be freely used under Attribution-ShareAlike license, unless stated otherwise. Cite this article:
Star Valley Facts for Kids. Kiddle Encyclopedia.