Dannemora is a town in Clinton County, New York, United States. The population was 4,898 at the 2010 census. The town is named after Dannemora, Sweden, an important iron-mining region.

The town of Dannemora contains a village also called Dannemora, the southern portion of which is located in the town of Saranac. Both village and town are on the western border of Clinton County, west of Plattsburgh.

The area was first settled around 1838. A prison was opened in 1845 in order to use the prisoners in local mining operations. The town of Dannemora was formed in 1854 from the town of Beekmantown.

The west town line is the border of Franklin County.

New York State Route 374 is an east-west highway in Dannemora.

There were 850 households, out of which 30.8% had children under the age of 18 living with them, 52.2% were married couples living together, 11.6% had a female householder with no husband present, and 31.2% were non-families. Of all households 26.6% were made up of individuals, and 14.0% had someone living alone who was 65 years of age or older. The average household size was 2.46 and the average family size was 2.91.

Note: The census counts prisoners based on where they are incarcerated. With the all-male state prison in Dannemora, the data listed above, except for household and family data, is likely to be skewed in comparison with the remainder of the town population and the population of neighboring non-prison towns, particularly with regard to ethnicity and the female:male ratio, because a disproportionate percentage of the prison population is male and black or Hispanic. 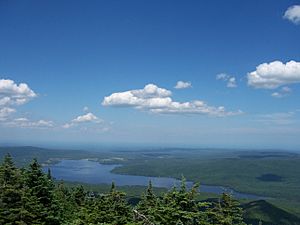 View of Chazy Lake from the top of Lyon Mountain

All content from Kiddle encyclopedia articles (including the article images and facts) can be freely used under Attribution-ShareAlike license, unless stated otherwise. Cite this article:
Dannemora (town), New York Facts for Kids. Kiddle Encyclopedia.