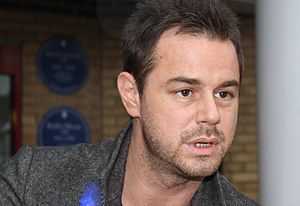 Dyer has also acted in theatre and on television, including two episodes each of The Bill and Skins, as well as playing Mick Carter in EastEnders (2013–present).

All content from Kiddle encyclopedia articles (including the article images and facts) can be freely used under Attribution-ShareAlike license, unless stated otherwise. Cite this article:
Danny Dyer Facts for Kids. Kiddle Encyclopedia.