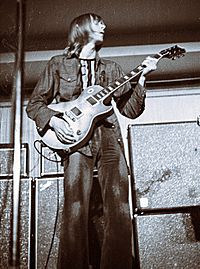 Daniel David Kirwan (13 May 1950 – 8 June 2018) was a British Hall of Fame blues rock guitarist and singer-songwriter. He was born in London. His greatest success came with his role as a member of the band Fleetwood Mac between 1968 and 1972.

All content from Kiddle encyclopedia articles (including the article images and facts) can be freely used under Attribution-ShareAlike license, unless stated otherwise. Cite this article:
Danny Kirwan Facts for Kids. Kiddle Encyclopedia.