The Dashavatara refers to the ten Primary incarnations of Lord Vishnu, the god of preservation. Vishnu is said to descend in the form of an avatar to restore balance in the world.

The list of included avatars varies across sects and regions. All avatars have appeared except Kalki, who will appear at the end of the Kali Yuga.

The order of the ancient concept of Dashavataras has been interpreted to be reflective of modern Darwinian evolution- it is the theory of evolution told as a story, written between 12-14,000 years ago. It describes the cycle of human evolution beginning in water as Matsya the fish, on to the amphibious phase (half land and water) as Koorma, the tortoise, on to begin firmly established on land as the wild boar Varaha, then Narsimha- half man- half animal, followed by Vamana, the Dwarf man, on to Parashurama, the emotionally volatile man, on to Rama, the peaceful man, then Krishna, a loving man followed by Buddha, the meditative man, who is said to be succeeded by the final incarnation of Vishnu, or the last stage of evolution as Kalki, the mystical man. This is thus also a description of the evolution of consciousness 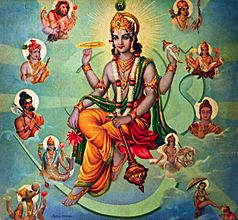 Vishnu depicted with his Avatars[Incarnations]

The word “Avatar”, a Sanskrit word means “descent”. In Sanatana Dharma it means the Descent/Incarnation/Manifest/Appearance of Lord/Supreme Being/Deity in an earthly embodiment.

There is no reference of Avatar exists in Vedas. The Bhagavad Gita discusses the subject matter associated with Avatar in textual format in Chapter 4 Slokas 5~9, where Lord Shri Krishna Himself declared the role of taking Avatar.

Whenever and wherever there is a decline in religious practice, O descendant of Bharata, and a predominant rise of irreligion — at that time I descend Myself. To deliver the pious and to annihilate the miscreants, as well as to reestablish the principles of religion, I Myself appear, millennium after millennium. (Bhagavad Gita Chapter 4 Verses 7~8)

Various versions of the list of Vishnu's avatars exist, varying per region and tradition. Some lists mention Krishna as the eighth avatar and the Buddha as the ninth avatar, while others – such as the Yatindramatadipika, a 17th-century summary of Srivaisnava doctrine – give Balarama as the eighth avatar and Krishna as the ninth. The latter version is followed by some Vaishnavas who don't accept the Buddha as an incarnation of Vishnu. Though no list can be uncontroversially presented as standard, the "most accepted list found in Puranas and other texts is [...] Krishna, Buddha."

The following table summarises the position of avatars within the Dashavatara

The Fish, the Tortoise, the Boar, the Man-Lion, the Dwarf, Parasurama, Rama, Krisna, Buddha, and also Kalki: These ten names should always be meditated upon by the wise. Those who recite them near the diseased are called relatives. ---Garuda Purana Saroddhara by Navanidhirama (translated by E. Wood and S.V. Subrahmanyam), Chapter VIII, Verses 10-11

Description of the Avatars

All content from Kiddle encyclopedia articles (including the article images and facts) can be freely used under Attribution-ShareAlike license, unless stated otherwise. Cite this article:
Dashavatar Facts for Kids. Kiddle Encyclopedia.