Kids Encyclopedia Facts
This page is about the American soldier. For others with similar names, see David McIntosh.

David Gregg McIntosh (March 16, 1836 – October 16, 1916) was a Confederate artillery officer during the American Civil War from the state of South Carolina.

David McIntosh attended St. David's Academy and graduated in 1855 from South Carolina College at Columbia. After graduation McIntosh studied law and was admitted to the bar. He practiced law and was a member of the local militia.

After South Carolina seceded on December 20, 1860 and war broke out, McIntosh offered his services to the state. On July 29, 1861 he was appointed captain of Company D, 1st South Carolina Infantry, seeing action at the Battle of Vienna. His company was converted to the Pee Dee Light Artillery in 1862 and he saw action on the Peninsula Campaign, the Battle of Harpers Ferry, the Battle of Antietam, and the Battle of Fredericksburg.

McIntosh was present with the battalion at the Battle of Appomattox Court House, April 9, 1865, a Confederate defeat. Knowing that the Confederate States' Army of Northern Virginia was about to surrender to Union Gen. Ulysses S. Grant, McIntosh and several companions slipped through Union lines to join CSA Gen. Joseph E. Johnston's debilitated Army of Tennessee in North Carolina to continue the struggle. However, as that hard-pressed army was prepared to surrender to USA Gen. William T. Sherman, McIntosh then proceeded to join Confederate States President Jefferson Davis, to aid his flight from encroaching Union forces with the remnants of the Confederate government and records. McIntosh left to join CSA forces in the Trans-Mississippi Department, commanded by Lt. Gen. Simon Bolivar Buckner and later General Edmund Kirby Smith. However, President Davis was captured at Irwinville, Ga., on May 10, 1865, and with the final surrender of all CSA armies in the field the war came to a close.

When the War ended, McIntosh resumed the practice of law, this time in Towson, Maryland. Eventually McIntosh becoming the head of the Maryland state bar association. His notable post-war accomplishments include authoring a pamphlet on the battle of Chancellorsville.

McIntosh lived into the 20th century, dying in Towson in 1916. He is buried in Richmond, Virginia, in Hollywood Cemetery. 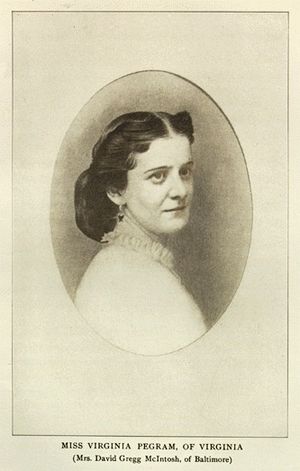 McIntosh was married to Virginia Pegram and was a brother-in-law to Confederate General John Pegram and his younger brother William J. Pegram. William Pegram was also a famous "gunner" in the Third Corps of the Army of Northern Virginia on a par with McIntosh.

All content from Kiddle encyclopedia articles (including the article images and facts) can be freely used under Attribution-ShareAlike license, unless stated otherwise. Cite this article:
David Gregg McIntosh Facts for Kids. Kiddle Encyclopedia.