Born in St. Paul, Minnesota, where his father was on the faculty (and later president) of Macalester College, he attended Mount Hermon School as a youth (now Northfield Mount Hermon School). Wallace attended college at Macalester from 1907 to 1909 and transferred to the University of California, Berkeley for two years. He returned to St. Paul in 1912 and was hired by a publishing firm specializing in farming literature. 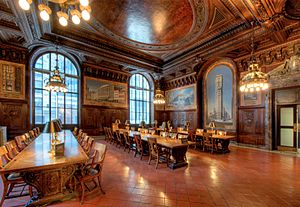 Room 108 of the New York Public Library, now known as the DeWitt Wallace Periodical Room, services current unbound issues of 68 popular periodical titles and 22 domestic and foreign newspapers. In the 1920s DeWitt Wallace spent countless hours in this room, reading and condensing articles from the Library's collection. In 1983, the room's restoration was made possible by a gift from the Wallace Fund, established by DeWitt Wallace.

During World War I, Wallace enlisted in the U.S. Army and was wounded. He spent four months in a French hospital recovering from his injuries, passing the time by reading American magazines.

Returning to the U.S., Wallace spent every day of the next six months at the Minneapolis Public Library researching and condensing magazine articles. He wanted to create a magazine with articles on a wide variety of subjects, abridged so that each could be easily read. Wallace showed his sample magazine to Lila Bell Acheson, sister of an old college friend, who responded enthusiastically. He proposed to her and on October 15, 1921, they were married.

The Wallaces decided to publish the magazine themselves and market it by direct mail. The first issue appeared on February 5, 1922. Reader's Digest soon became one of the most widely circulated periodicals in the world. Wallace was a supporter of the Republican Party with strong anti-communist views, and the magazine reflected these beliefs. Wallace and his wife were strong supporters of Richard Nixon's presidential bid in 1968, giving Nixon cash donations and allowing Nixon to write articles for the Digest.

Wallace was a noted philanthropist, donating much of his massive fortune to his alma mater Macalester College. The Wallaces also established a number of foundations that are now consolidated as The Wallace Foundation, which supports education, youth development and the arts. There is a dormitory with his name on the Northfield Mount Hermon campus. He funded the DeWitt Wallace Decorative Arts Museum, opened in 1985 at Colonial Williamsburg, Virginia.

On January 28, 1972, DeWitt Wallace was presented with the Presidential Medal of Freedom by President Richard Nixon.

Wallace was inducted into the Junior Achievement U.S. Business Hall of Fame in 1980.

All content from Kiddle encyclopedia articles (including the article images and facts) can be freely used under Attribution-ShareAlike license, unless stated otherwise. Cite this article:
DeWitt Wallace Facts for Kids. Kiddle Encyclopedia.