Death and state funeral of Richard Nixon facts for kids 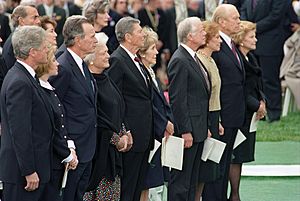 On April 22, 1994, Richard Milhous Nixon, the 37th President of the United States, died after having a stroke four days earlier, at the age of 81. His state funeral followed five days later at the Richard Nixon Presidential Library and Museum in his hometown of Yorba Linda, California. His death was the first Presidential death in 21 years, since President Lyndon B. Johnson's death in 1973.

His body was flown to Marine Corps Air Station El Toro, Orange County, California, via SAM 27000, the presidential plane used as Air Force One while Nixon was in office. His body was transported to the Nixon Library and laid in repose. A public memorial service was held on April 27, with world leaders from 85 countries and all five living Presidents of the United States, the first time that five U.S. presidents attended the funeral of another president.

Nixon's state funeral is unique among recent presidential state funerals in that since he wanted his funeral not to be held at Washington, D.C..

All content from Kiddle encyclopedia articles (including the article images and facts) can be freely used under Attribution-ShareAlike license, unless stated otherwise. Cite this article:
Death and state funeral of Richard Nixon Facts for Kids. Kiddle Encyclopedia.