Decatur House is a historic house museum at 748 Jackson Place in Washington, D.C., the capital of the United States. It is named after its first owner and occupant Stephen Decatur. The house (built, 1818) is located at the northwest corner of Lafayette Square, at the southwest corner of Jackson Place and H Street, near the White House. A museum, it now serves as the National Center for White House History, managed by the White House Historical Association.

Decatur House is one of the oldest surviving homes in Washington, D.C., and one of only three remaining houses in the country designed by neoclassical architect Benjamin Henry Latrobe. Completed in 1818 for naval hero Stephen Decatur and his wife, Susan, the Federal Style house is prominently located across Lafayette Square from the White House. It was successively home to Henry Clay, Martin Van Buren and Edward Livingston, who collectively made Decatur House the unofficial residence of the Secretary of State from 1827 to 1833, each renting the house while they served in that post.

In 1836 John Gadsby and his wife Providence moved into the house and brought their house slaves. They built a two-story structure at the back which became the slave quarters for those workers, who previously lived in the main house. This structure remains as one of the few examples of slave quarters in urban areas. It is physical evidence of African Americans having been held "in bondage in sight of the White House."

Following John Gadsby's death, the home was again rented to a series of prominent tenants. In order, these tenants were Vice President George M. Dallas, publisher and former Mayor of Washington Joseph Gales, Congressmen and brothers John A. King and James G. King, Rep. William Appleton, Speaker of the House James Lawrence Orr and Sen. Judah Benjamin. During the Civil War it was used as Army offices and then it sat empty for six years.

Decatur House was purchased in 1872 by Edward Fitzgerald Beale, a frontiersman and explorer who later became a rancher and diplomat. Beale's daughter-in-law, Marie, bequeathed Decatur House to the National Trust for Historic Preservation in 1956. The house was designated a U.S. National Historic Landmark in 1976.

Decatur House, now a museum, is located at 748 Jackson Place, N.W., on President's Park (Lafayette Park). The lower floor is kept in the style of the early 19th century while the upper floor shows more modern renovations of the early 20th century.

Because of the centrality of its location, the status of its residents, and the fact that urban slaves worked there across from the White House, the house now contains more material interpreting African American history. Among the stories is that of Charlotte Dupuy, who in 1829 sued her master Henry Clay, then Secretary of State, for her freedom and that of her two children. While she lost her court case, Clay finally freed Dupuy and her daughter in 1840, and her son in 1844. A special exhibit on African American history through 1965 has recently been added to the museum and its website. 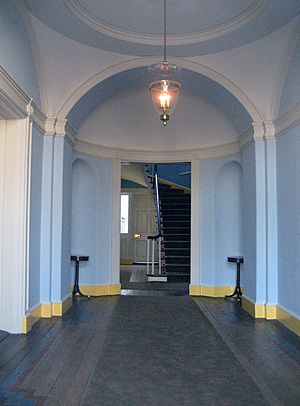 All content from Kiddle encyclopedia articles (including the article images and facts) can be freely used under Attribution-ShareAlike license, unless stated otherwise. Cite this article:
Decatur House Facts for Kids. Kiddle Encyclopedia.