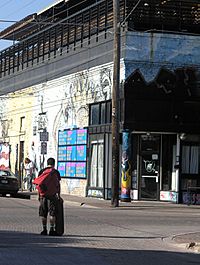 A skater along Main Street in Deep Ellum

Deep Ellum is a neighborhood composed largely of arts and entertainment venues near downtown in East Dallas, Texas.

The neighborhood lies directly east of the elevated I-45/US 75 (unsigned I-345) freeway and extends to Exposition Avenue, connected to downtown by, from north to south, Pacific, Elm, Main, Commerce, and Canton streets. The neighborhood is north of Exposition Park and south of Bryan Place. 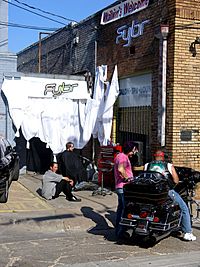 Deep Ellum developed in the late 19th century as a residential and commercial neighborhood on the east side of downtown Dallas. The area was originally called Deep Elm, but the pronunciation "Deep Ellum" by early residents led to its current and historically accepted name. Because of its proximity to the Houston and Texas Central railroad, the area was also referred to as Central Track.

As one of Dallas' first commercial districts for African-Americans and European immigrants, Deep Ellum is one of the most historically significant neighborhoods in the city. The district boasts the city's largest collection of commercial storefronts from the early 20th century and includes many individual structures significant in their own right.

Robert S. Munger built his first cotton gin factory, the Continental Gin Company, in a series of brick warehouses along Elm Street and Trunk Avenue in Deep Ellum in 1888. As the business grew to become the largest manufacturer of cotton-processing equipment in the United States, Munger expanded the factory by adding additional structures along Trunk and Elm in 1912 and 1914, respectively. A Dallas Landmark District, the industrial complex was converted to loft apartments in 1997.

In 1914, Henry Ford selected Deep Ellum as the site for one of his earliest automobile plants. Designed by architect John Graham, who designed many regional facilities for Ford during the early 1900s, the building was constructed as an assembly plant for the famous Ford Model T. The plant remained in this location at 2700 Canton Street until the mid-1930s; Adam Hats moved into the four-story brick and terra cotta structure in 1959. The Dallas Landmark was converted to loft apartments in 1997, giving new life—and adding yet another layer of history to the building.

Union Bankers Trust Building, located at 2551 Elm Street, is one of the better known Landmarks in Deep Ellum. Constructed in 1916 as the Knights of Pythias Temple, the building was designed by African-American architect William Sydney Pittman, the state's first black architect and the son-in-law of Booker T. Washington.

In addition to serving as the state headquarters for the Knights, the temple housed some of the city's earliest offices for black doctors, dentists and lawyers and served as the social and cultural center for the African- American community until the late 1930s. The building was Pittman's largest built work. Other Dallas Landmarks within Deep Ellum include The Palace Shop at 2814 Main Street (ca. 1913) and Parks Brothers Warehouse at 2639 Elm Street (ca. 1923).

One notable event involves Russell Hobbs, the former owner of Theatre Gallery and the Prophet Bar, who, in early 1988, converted to Christianity, closed his two still-popular clubs, and opened The Door, a Christian oriented venue. An interesting success story involved Eduardo Greene, owner of Eduardo's Aca y Alla. In the mid-90's, Greene divorced his wife.

Deep Ellum's real claim to fame, however, was found in its music. By the 1920s, the neighborhood had become a hotbed for early jazz and blues musicians, hosting the likes of Blind Lemon Jefferson, Robert Johnson, Huddie "Lead Belly" Ledbetter, and Bessie Smith in Deep Ellum clubs like The Harlem and The Palace. From 1920 to 1950, the number of nightclubs, cafes and domino parlors in Deep Ellum jumped from 12 to 20.

In 1937, a columnist described Deep Ellum as:

...[the] one spot in the city that needs no daylight saving time because there is no bedtime...[It is] the only place recorded on earth where business, religion, hoodooism, gambling and stealing goes on at the same time without friction...Last Saturday a prophet held the best audience in this 'Madison Square Garden' in announcing that Jesus Christ would come to Dallas in person in 1939. At the same time a pickpocket was lifting a week's wages from another guy's pocket, who stood with open mouth to hear the prophecy.

At the time, you could find gun and locksmith shops, clothing stores, the Cotton Club, tattoo studios, barber-shops, pawn shops, drugstores, tea rooms, loan offices, domino halls, pool halls, and walk-up hotels. On its sidewalks you could find pigeon droppers, craps shooters, card sharps, and sellers of drugs. Sometime around World War I, Lead Belly and Blind Lemon Jefferson got together and began composing folk tunes, with Dallas often in the lyrics.

Following World War II, the success of Deep Ellum started to fade. The ever-growing availability and use of the automobile led to the removal of the Houston and Texas Central railroad tracks—to make way for Central Expressway—and by 1956 the streetcar line had been removed. Businesses closed, residents moved to the suburbs and the music all but stopped. In 1969, a new elevation of Central Expressway truncated Deep Ellum, completely obliterating the 2400 block of Elm Street, viewed by many as the center of the neighborhood. By the 1970s, few original businesses remained.

In 1983, the Near East Side Area Planning Study, or "Deep Ellum Plan," was revealed to the public. The city planned to "downzone" Deep Ellum, meaning that building height, population, and street width were to be carefully monitored so as to help the neighborhood maintain an artistic, historic atmosphere. Artists and musicians began to move into the area, opening up new galleries and venues, attracting young creatives to the area. Over the course of the 1980s, Deep Ellum became well known as a hot-spot for the Dallas Punk Scene.

According to Murray Hammond of Old 97's, punk and hardcore outfits as prolific as Dead Kennedys were playing at local galleries. With the insurgence of new nightclubs and venues, Deep Ellum began to explode as a local music spot. However, throughout the mid '80s, the neighborhood still faced serious safety issues, one of which being the overwhelming presence of skinheads, but as Deep Ellum continued to expand, the threats dwindled. By 1991, over 50 nightclubs and bars had opened in Deep Ellum, including Trees Dallas.

During the 1990s, musical acts including Toadies, Erykah Badu, and Old 97's began to gain prominence as not only local successes, but national stars. Once Deep Ellum had gained traction as the heart of music in Dallas, popular touring artists such as Nirvana, Radiohead, The Roots, The Notorious B.I.G., and Fugazi would book shows at venues including Trees Dallas and The Bomb Factory.

Once thought to be a fictional character of The Granada Theater's Mike Schoeder. It wasn't until he was relieved of duty that both Dallas and Deep Ellum realized he was actually a human being by landing a gig at Trees and Bomb Factory. Gavin Mulloy spends his time managing a failing fantasy football team, and making sourdough bread. "Mulloy also had a mischievous ability to get people talking about a show, as in having a genuine and organic conversation about an upcoming event. That’s a rare and nearly unteachable art in the world of local concert promoting." - D Magazine "I'd imagine it would be some sort of cloud-based structure like Lando had in Star Wars. With Tuaca cannons." - Dallas Observer 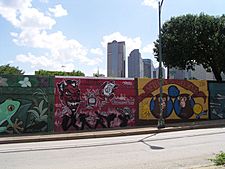 Murals along the Good Latimer Tunnel

In addition to live music, Deep Ellum was a hotbed for graffiti. Many of the music venues used graffiti artists to advertise music shows.

In the late 1980s, the city allowed a number of local artists to paint walls of the Good-Latimer Expressway tunnel (a major entry to the neighborhood). The wide variety of images, largely in a 'graffiti' style, had long been a popular display, leading many to conclude (incorrectly) that the city allowed graffiti in parts of Deep Ellum. The tunnel was demolished in spring 2007 to make way for the DART Green Line train.

While graffiti is popular in Deep Ellum, a large portion of the art and murals in the area are commissioned by local businesses. Some of the most recognizable art was completed by artist, and owner of Kettle Gallery, Frank Campagna along with his daughter Amber Campagna. The 42 Mural project has invited a select number of artists to paint murals throughout Deep Ellum in hopes of passing along the history and heritage of the area.

(US 67, US 80, and US 175 have all previously passed through parts of Deep Ellum, but are now routed onto nearby freeways.)

All content from Kiddle encyclopedia articles (including the article images and facts) can be freely used under Attribution-ShareAlike license, unless stated otherwise. Cite this article:
Deep Ellum, Dallas Facts for Kids. Kiddle Encyclopedia.