Dendrobium bigibbum, commonly known as the Cooktown orchid or mauve butterfly orchid, is an epiphytic or lithophytic orchid in the family Orchidaceae. It has cylindrical pseudobulbs, each with between three and five green or purplish leaves and arching flowering stems with up to twenty, usually lilac-purple flowers. It occurs in tropical North Queensland, Australia and New Guinea. 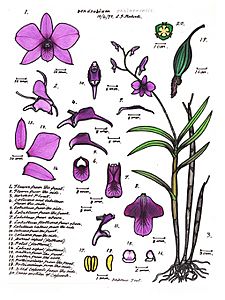 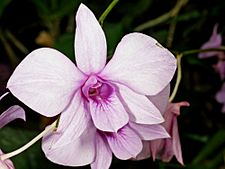 There are four varieties of this orchid, each of which has previously been considered a separate species.

Dendrobium bigibbum was first formally described in 1852 by John Lindley and the description was published in Paxton's Flower Garden.

Four varieties of this species are recognised by the World Checklist of Selected Plant Families (WCSP):

The Queensland government, in preparation for its 1959 Centenary, sought advice as to what native species would be a good floral emblem. Specifically, the government was looking for an easily grown species found only in Queensland, which was decorative, distinctive, and close to the State colour, maroon. The Cooktown orchid, which meets these criteria, was one of the four initial suggestions, the others being the red silky oak (Grevillea banksii), the umbrella tree (Brassaia actinophylla (now Schefflera actinophylla), and the wheel-of-fire (Stenocarpus sinuatus). The Courier-Mail, a Brisbane newspaper, sought additional suggestions from its readers, and compiled a list of 13 possibilities. In a public poll, the Cooktown orchid came in first place, the red silky oak in second, and poinsettia (Euphorbia pulcherrima), already the floral emblem of the capital city Brisbane, came in third.

In 1968 the Cooktown orchid was featured on an Australian postage stamp.

This orchid species grows on trees and rocks in rainforest, coastal scrub, near rivers, in swamps and open forest in tropical Queensland, southern New Guinea and a single island in Indonesia.

Dendrobium bigibbum is listed as "vulnerable" under the Australian Government Environment Protection and Biodiversity Conservation Act 1999. The main threats to the species are "settlement and visitor pressures", inappropriate fire regimes and illegal collection.

It is illegal to collect the Cooktown orchid from its natural environment without a licence. Commercially cultivated plants like a dry, sunny position with a minimum of watering and a temperature that does not fall below 13 °C (55 °F). Specimens need a bush-house in cooler climates.

All content from Kiddle encyclopedia articles (including the article images and facts) can be freely used under Attribution-ShareAlike license, unless stated otherwise. Cite this article:
Dendrobium bigibbum Facts for Kids. Kiddle Encyclopedia.