Denio is a census-designated place (CDP) in Humboldt County, Nevada, along the Oregon state line in the United States. The Denio post office was originally north of the state line in Harney County, Oregon, but the residents moved the building into Nevada in the mid-20th century. The population of the CDP, which is entirely in Nevada, was 47 at the 2010 census; additional development considered to be Denio extends into Oregon. The CDP includes a post office, a community center, a library, and the Diamond Inn Bar, the center of the town's social life. Recreational activities in the Denio area include bird watching, photography, off road vehicle use, fishing, recreational black opal mining, rockhounding, hunting, visiting the hot springs, and camping on the Sheldon National Wildlife Refuge.

Denio was named for Aaron Denio, who settled in the area in 1885. Aaron Denio was born in 1824 in Illinois and traveled to California in 1860. He worked in milling, mining, and farming in Nevada and California for 25 years before settling near the Oregon-Nevada border. He died at Denio in 1907. Denio post office was established in Oregon in 1888. After World War II a number of businesses relocated south of the state line to take advantage of Nevada's more liberal liquor and gambling laws. The post office moved and reopened in Nevada in 1950. 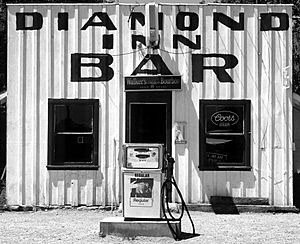 Denio has a public library, a branch of the Humboldt County Library.

All content from Kiddle encyclopedia articles (including the article images and facts) can be freely used under Attribution-ShareAlike license, unless stated otherwise. Cite this article:
Denio, Nevada Facts for Kids. Kiddle Encyclopedia.