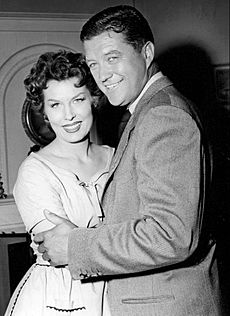 Dennis Morgan (December 30, 1909 – September 7, 1994) was an American actor and singer. He played Jefferson in Christmas in Connecticut. He played Paul Hudson in The Desert Song.

Morgan was born Stanley Morner in Prentice, Wisconsin, on December 30, 1909. He died in Fresno, California of respiratory failure on September 7, 1994.

All content from Kiddle encyclopedia articles (including the article images and facts) can be freely used under Attribution-ShareAlike license, unless stated otherwise. Cite this article:
Dennis Morgan Facts for Kids. Kiddle Encyclopedia.