Devoke Water is a small lake in the mid-west region of the English Lake District, in the county of Cumbria. It is the largest tarn in the Lake District.

It can be reached via a bridle track. There is a two-storey stone boathouse-cum-refuge and a ruined stable. 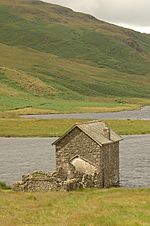 Devoke Water has an outlet in the north west, via Linbeck Gill, which joins the River Esk at the hamlet of Linbeck.

The fishing rights to Devoke Water are owned by Millom Anglers and it is stocked with brown trout. It also holds perch.

The Circuit of Devoke Water

One of the chapters of Alfred Wainwright's The Outlying Fells of Lakeland is a circular walk anticlockwise around Devoke Water, starting and finishing on the road to the east. He describes the summits Rough Crag at 1,049 feet (320 m), Water Crag at 997 feet (304 m), White Pike at 1,370 feet (420 m), Yoadcastle at 1,610 feet (490 m), Woodend Height at 1,597 feet (487 m) and Seat How at 1,020 feet (310 m), and says that "it is predominantly for the mountain prospect that this walk gains a strong recommendation", noting that the view from the summits includes Pillar and nearby fells to the north, the Scafell group to the north north east and the Bowfell group to the north east, as well as the Isle of Man and Sellafield power station. He warns that "Linbeck Gill is uncrossable dryshod after rain".

All six summits are classified as Birketts. Yoadcastle is classed as a Fellranger, being described by Richards in the Coniston volume of his book series. It is among the 21 such summits (originally 18 before the extension of the Lake District) which are not included in Wainwright's main list of 214.

All content from Kiddle encyclopedia articles (including the article images and facts) can be freely used under Attribution-ShareAlike license, unless stated otherwise. Cite this article:
Devoke Water Facts for Kids. Kiddle Encyclopedia.