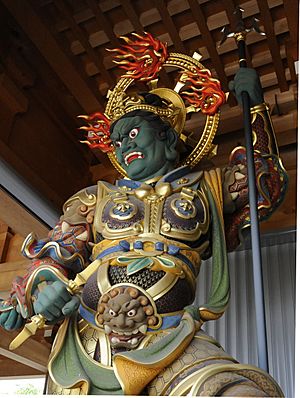 Dhṛtarāṣṭra is the guardian god of the East. He lives on the eastern part of Mount Sumeru. He is leader of the gandharvas and the pishacas.

He is often shown in art playing a stringed instrument.

In the Pāli writings of the Theravada Buddhist tradition, Dhṛtarāṣṭra is called Dhataraṭṭha. Dhataraṭṭha is one of the Four Great Kings, each one of which rules over a direction. Vessavaṇa's direction is the eastern quarter of the world.

He has many sons called "Indra." He also has a daughter named Sirī.

In Japan, Jikokuten (持国天) is often shown wearing a suit of armor. He usually holds a sword and a trident while standing on top of a demon called a jaki.

All content from Kiddle encyclopedia articles (including the article images and facts) can be freely used under Attribution-ShareAlike license, unless stated otherwise. Cite this article:
Dhritarashtra Facts for Kids. Kiddle Encyclopedia.