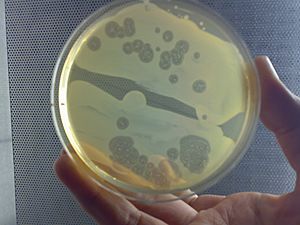 A petri dish of Dictyostelium

The dictyostelids are a group of cellular slime molds, or "social amoebae". They are unusual eukaryote organisms. For much of their life they live as separate cells. Then in hard times they come together to reproduce as a fruiting body. The fruiting body produces spores with protective walls. They survive and open up in better times. So these organisms are both unicellular and multicellular.

As separate amoebae, they feed and divide normally. They mostly eat soil bacteria. When the food supply runs out, they come together to form a kind of slug-like thing. The slug has a definite front and rear. It responds to light and temperature differences, and can move. Under the right conditions the slug becomes a sporocarp (fruiting body). A stalk holds up one or more balls of spores. These spores are inactive cells protected by tough cell walls. They become new amoebae when food is available.

Dictyostelium has been used as a model organism in molecular biology and genetics. It is studied as an example of cell communication, differentiation, and programmed cell death (apoptosis). Research on Dictyostelium is available on-line at dictyBase. 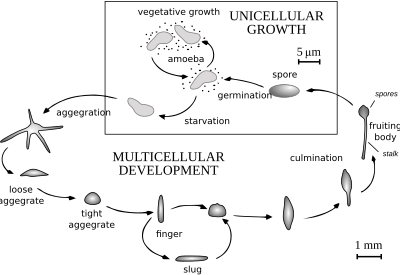 The aggregation of the amoebae relies on a signal molecule. One cell, the founder of the colony, begins to secrete the signal in response to stress. Others detect the signal, and respond in two ways:

The effect of this is to relay the signal through the nearby population of amoebae. They move to the area of highest signal concentration.

They were first discovered in a North Carolina forest in 1935. Dictyostelium discoideum was at first classified under 'lower fungi'. Later it was put in the kingdoms Protista and Fungi. By the 1990s, most scientists accepted the present classification.

Amoebozoa are now regarded as a separate kingdom-level clade, being more closely related to both animals and fungi than to plants.

The entire genome of Dictyostelium discoideum was published in Nature in 2005. The haploid genome contains about 12,500 genes on six chromosomes. For comparison, the diploid human genome has 20,000–25,000 genes (represented twice) on 23 chromosome pairs.

Dictyostelium shares many molecular features with macrophages. Macrophages are the human host of Legionella. The cytoskeletal composition of D. discoideum is similar to that of mammalian cells. So are the processes driven by these components, such as phagocytosis, membrane trafficking, endocytic transit and vesicle sorting. Like leukocytes, D. discoideum have chemotaxis. Hence, D. discoideum is a suitable model system to see the influence of host cell factors during Legionella infections.

All content from Kiddle encyclopedia articles (including the article images and facts) can be freely used under Attribution-ShareAlike license, unless stated otherwise. Cite this article:
Dictyostelid Facts for Kids. Kiddle Encyclopedia.