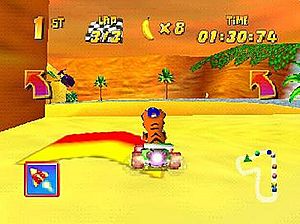 In this screenshot, Timber the Tiger is racing in a desert-themed track. The interface displays the player's current position, number of laps, bananas, time, and a map of the track.

Diddy Kong Racing is a racing video game for the Nintendo 64 game console. It was developed and published by Rareware. It is the first spin-off of the Donkey Kong Country series. It was released on November 14, 1997 in North America, and on November 21, 1997 in Japan and Europe.

Diddy Kong Racing has gameplay that is similar to Mario Kart 64. It has an adventure mode with several worlds that have several race tracks, a battle stage, and a race against a boss. Players can choose to use a car, a hovercraft, or a plane, although some tracks make the player use one of those. Each track has boosters that make the player go faster, and balloons that give the player an item that they can use during the race. Players can choose from 10 characters. Two of the game's characters, Conker and Banjo, would later star in their own games. Conker went on to star in Conker's Bad Fur Day, while Banjo went on to star in Banjo-Kazooie.

A remake for the Nintendo DS called Diddy Kong Racing DS was released on February 5, 2007 in North America and on April 20, 2007 in Europe. It has better graphics and use of the console's touch screen. Banjo and Conker do not appear in it.

All content from Kiddle encyclopedia articles (including the article images and facts) can be freely used under Attribution-ShareAlike license, unless stated otherwise. Cite this article:
Diddy Kong Racing Facts for Kids. Kiddle Encyclopedia.