Kids Encyclopedia Facts
This article is about Possumwood (disambiguation). For other uses, see Diospyros virginiana (disambiguation).
Not to be confused with Amelanchier canadensis, also called sugarplum
"Simmon" redirects here. For the software program, see SIMMON.

Diospyros virginiana is a persimmon species commonly called the American persimmon, common persimmon, eastern persimmon, simmon, possumwood, possum apples, or sugar plum. It ranges from southern Connecticut to Florida, and west to Texas, Louisiana, Oklahoma, Kansas, and Iowa. The tree grows wild but has been cultivated for its fruit and wood since prehistoric times by Native Americans.

Diospyros virginiana grows to 20 m (66 ft), in well-drained soil. In summer, this species produces fragrant flowers which are dioecious, so one must have both male and female plants to obtain fruit. Most cultivars are parthenocarpic (setting seedless fruit without pollination). The flowers are pollinated by insects and wind. Fruiting typically begins when the tree is about 6 years old.

The fruit is round or oval and usually orange-yellow, sometimes bluish, and from 2 to 6 cm (3⁄4 to 2 1⁄4 in) in diameter. In the U.S. South and Midwest, the fruits are referred to as simply persimmons or "'simmons", and are popular in desserts and cuisine.

Commercial varieties include the very productive Early Golden, the productive John Rick, Miller, Woolbright and the Ennis, a seedless variety. Another nickname of the American persimmon, 'date-plum' also refers to a persimmon species found in South Asia, Diospyros lotus. 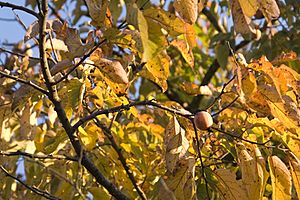 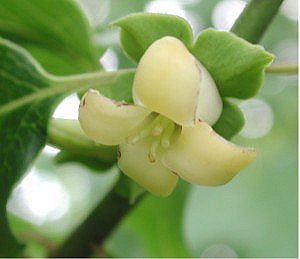 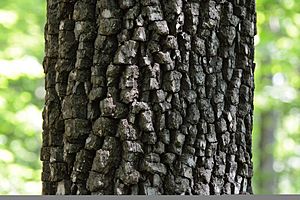 The plant itself is a small tree usually 30 to 80 feet (9 to 24 m) in height, with a short, slender trunk and spreading, often pendulous branches, which form a broad or narrow, round-topped canopy. The roots are thick, fleshy and stoloniferous. This species has a shrubby growth form. This plant has oval entire leaves, and unisexual flowers on short stalks. In the male flowers, which are numerous, the stamens are sixteen in number and arranged in pairs; the female flowers are solitary, with traces of stamens, and a smooth ovary with one ovule in each of the eight cells—the ovary is surmounted by four styles, which are hairy at the base. The fruit-stalk is very short, bearing a subglobose fruit an inch in diameter or a bit larger, of an orange-yellow color, ranging to bluish, and with a sweetish astringent pulp. It is surrounded at the base by the persistent calyx-lobes, which increase in size as the fruit ripens. The astringency renders the fruit somewhat unpalatable, but after it has been subjected to the action of frost, or has become partially rotted or "bletted" like a medlar, its flavor is improved.

The tree is very common in the South Atlantic and Gulf states, and attains its largest size in the basin of the Mississippi River. Its habitat is southern, it appears along the coast from Connecticut to Florida; west of the Alleghenies it is found in southern Ohio and along through southeastern Iowa and southern Missouri; when it reaches Louisiana, eastern Kansas and Oklahoma it becomes a mighty tree, one hundred fifteen feet high.

Its fossil remains have been found in Miocene rocks of Greenland and Alaska and in Cretaceous formations in Nebraska.

Diospyros virginiana is considered to be an evolutionary anachronism that was consumed by one or more of the Pleistocene megafauna that roamed the North American continent until 10,000 years ago. A 2015 study found that passage of persimmon seeds through the gut of modern elephants increased the rate of seed germination and decreased time to sprouting, which supports the idea that Pleistocene members of the elephant family were the ghost partner who accomplished seed dispersal prior to extinction of the North American members of the elephant family.

The peculiar characteristics of its fruit have made the tree well known. This fruit is a globular berry, with variation in the number of seeds, sometimes with eight and sometimes without any. It bears at its apex the remnants of the styles and sits in the enlarged and persistent calyx. It ripens in late autumn, is pale orange with a red cheek, often covered with a slight glaucous bloom. One joke among Southerners is to induce strangers to taste unripe persimmon fruit, as its very astringent bitterness is shocking to those unfamiliar with it. The peculiar astringency of the fruit is due to the presence of a tannin similar to that of cinchona. The seeds were used as buttons during the American Civil War.

The fruit is high in vitamin C. The unripe fruit is extremely astringent. The ripe fruit may be eaten raw, cooked or dried. The fruit pulp can be made into pie, pudding, jam, and molasses. A tea can be made from the leaves and the roasted seed is used as a coffee substitute. Other popular uses include desserts such as persimmon pie, persimmon pudding, or persimmon candy.

The fruit is also fermented with hops, cornmeal or wheat bran into a sort of beer or made into brandy. The wood is heavy, strong and very close-grained and used in woodturning.

The tree is greatly inclined to vary in the character and quality of its fruit, in size this varies from that of a large cherry to a small apple. Some trees in the south produce fruit that is delicious without the action of the frost, while adjoining trees produce fruit that never becomes edible.

It was brought to England before 1629 and is cultivated, but rarely if ever ripens its fruit. It is easily raised from seed and can also be propagated from stolons, which are often produced in great quantity. The tree is hardy in the south of England and in the Channel Islands.

In respect to the power of making heartwood, the persimmon rarely develops any heartwood until it is nearly one hundred years old. This heartwood is extremely close-grained and almost black, resembling ebony (of which it is a true variety).

It is a common misconception persimmon fruit needs frost to ripen and soften, called bletting. Some, such as the early-ripening varieties "pieper" and "NC21"(also known as "supersweet"), easily lose astringency and become completely free of it when slightly soft at the touch—these are then very sweet, even in the British climate. On the other hand, some varieties (like the very large fruited "yates", which is a late ripening variety) remain astringent even when the fruit has become completely soft (at least in the British climate). Frost, however, destroys the cells within the fruit, causing it to rot instead of ripen. Only completely ripe and soft fruit can stand some frost; it will then dry and become even sweeter (hence the misconception). The same goes for the Oriental persimmon (Diospyros kaki), where early frost can severely damage a fruit crop.

Ingestion by humans can result in formation of a diospyrobezoar, a condition where indigestible material from the persimmon pulp is retained in the intestines, most commonly in the stomach.

All content from Kiddle encyclopedia articles (including the article images and facts) can be freely used under Attribution-ShareAlike license, unless stated otherwise. Cite this article:
Diospyros virginiana Facts for Kids. Kiddle Encyclopedia.