Division of Calwell facts for kids 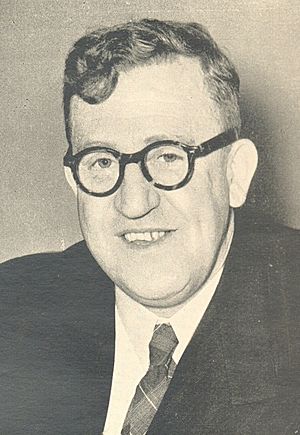 The Division of Calwell is an Australian Electoral Division in Victoria. It was created in 1984 and is named for Arthur Calwell, who was Minister for Immigration 1945-1949 and Leader of the Australian Labor Party 1960-1967.

It covers an area of 175 km2 in the northern suburbs of Melbourne and the boundary was last changed in 2010. It includes Broadmeadows, Craigieburn, Sunbury and Tullamarine.

Andrew Theophanous left the ALP in 2000 after claims he was taking bribes. He stood for the seat at the 2001 election as an independent but was defeated. He became the first Australian politician to be put in prison for bribery.

All content from Kiddle encyclopedia articles (including the article images and facts) can be freely used under Attribution-ShareAlike license, unless stated otherwise. Cite this article:
Division of Calwell Facts for Kids. Kiddle Encyclopedia.