Domenico Natale Sarro, also called Domenico Sarri, (24 December 1679 – 25 January 1744) was a composer from Italy. He composed 18 operas. He also composed, cantatas, oratorios, and music for flutes and other musical instruments. His operas placed great importance on the music for the singers. They are not often performed today, but they were very popular in Naples in the 1700s. Sarro was born in Trani, a city in southern Italy. He died in Naples. 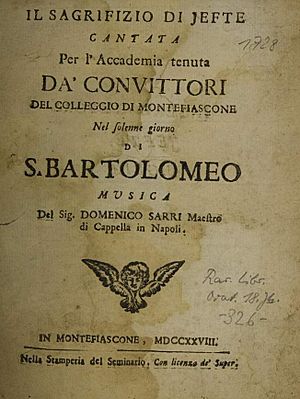 Domenico Sarro was born in Trani, a city in the Apulia region of Italy. His parents were Filippo and Isabella Sarro. When he was ten years old, his parents sent him to a conservatory (music school) in Naples. Some music historians say that his first music school was the Conservatorio della Pietà dei Turchini. Others say he also studied at the Conservatorio di Sant'Onofrio. (Conservatorio is the Italian word for conservatory.) He may also have been a teacher at the Conservatorio di Sant'Onofrio. His first important piece of music was an opera called Opera d'amore (The Work of Love). It was performed in Naples in 1702. The Prince of Villafranca helped Sarro when he was a young man. The Prince helped him to get the job of assistant music master (maestro di cappella) to the King of Naples in 1704. The Prince also paid Sarro to write pieces of music for him.

In 1705 Sarro married a young music student, Caterina Tortorella. He lost his job as assistant royal music master in 1707, when Austria took over Naples. From 1707 until 1718, he composed mostly church music, oratorios and serenades. He started writing operas again in 1718 and became very famous. He was the first composer to use a libretto by Pietro Metastasio for an opera. The opera was about Dido, Queen of Carthage. It was called Didone abbandonata. (Its title means Dido Abandoned in Italian.) It was performed in Naples in 1724 and was a big success. Sarro got his job back as assistant royal music master in 1725. In 1728, he also became the official music master for the city of Naples.

Sarro's opera Berenice was chosen to open the Teatro Argentina in Rome in 1732. When the royal music master Francesco Mancini died in 1737, Sarro took over his job. Later that year, his opera Achille in Sciro (Achilles in Skyros) was chosen to open the new Teatro di San Carlo in Naples. Sarro's wife Caterina died in April 1739. Three months later, he married Rachele de Siena. He was 59 years old. She was 27. Sarro's last new opera, Ezio, was performed in 1741 at the Teatro di San Carlo. It tells the story of Flavius Aetius, a Roman general in the 5th century. (Ezio is the Italian name for Aetius.) Domenico Sarro died in 1744. He was 64 years old. When he died, the composer Leonardo Leo took over his job as the royal music master.

All content from Kiddle encyclopedia articles (including the article images and facts) can be freely used under Attribution-ShareAlike license, unless stated otherwise. Cite this article:
Domenico Sarro Facts for Kids. Kiddle Encyclopedia.