Dorothy Canfield Fisher (February 17, 1879 – November 9, 1958) was an educational reformer, social activist, and best-selling American author in the early 20th century. She strongly supported women's rights, racial equality, and lifelong education. Eleanor Roosevelt named her one of the ten most influential women in the United States. In addition to bringing the Montessori method of child-rearing to the U.S., she presided over the country's first adult education program and shaped literary tastes by serving as a member of the Book of the Month Club selection committee from 1925 to 1951. 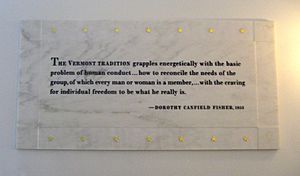 A quotation of Canfield Fisher in the Vermont State House Hall of Inscriptions interprets the state motto "Freedom and Unity" regarding the relation between individual freedom and the needs of the community.

Dorothea Frances Canfield – named for Dorothea Brooke of the novel Middlemarch – was born on February 17, 1879 in Lawrence, Kansas to James Hulme Canfield and Flavia Camp, an artist and writer. From 1877 to 1891 her father was a [University of Kansas professor with responsibility for various historical studies, and finally president of the National Education Association. Later he was chancellor of the University of Nebraska, president of Ohio State University, and librarian at Columbia University. Canfield Fisher is most closely associated with Vermont, where she and her mother made trips to the family home and where she spent her adult life. Vermont also served as the setting for many of her books.

In 1899 Canfield received a B.A. from Ohio State University, where she was a member of Kappa Kappa Gamma. She went on to study Romance languages at University of Paris and Columbia University (where her father was Librarian from 1899) and earned a doctoral degree from Columbia with the dissertation Corneille and Racine in English (1904). With George Rice Carpenter from Columbia she co-wrote English Rhetoric and Composition (1906). She was the first woman to receive an honorary degree from Dartmouth College and received others from the University of Nebraska, Middlebury College, Swarthmore College, Smith College, Williams College, Ohio State University, and the University of Vermont.

She married John Redwood Fisher in 1907, and they had two children, a daughter, Sally, and a son, Jimmy.

In 1911, Canfield Fisher visited the "children's houses" in Rome established by Maria Montessori. Much impressed, she joined the cause to bring the method back to the U.S., translating Montessori's book into English and writing five of her own: three nonfiction and two novels.

Another concern of Canfield Fisher was her war work. She followed her husband to France in 1916 during World War I and while raising her young children in Paris worked to establish a Braille press for blinded veterans. She also established a convalescent home for refugee French children from the invaded areas; continuing her relief work after the war, she earned citations of appreciation from Eleanor Roosevelt, Madame Chiang Kai-shek, and the government of Denmark.

Canfield Fisher died at the age of 79 in Arlington, Vermont in 1958.

Canfield Fisher engaged in social activism in many aspects of education and politics. She managed the first adult education program in the U.S. She did war-relief work in 1917 in France, establishing the Bidart Home for Children for refugees and organizing an effort to print books in Braille for blinded combat veterans. In 1919, she was appointed to the State Board of Education of Vermont to help improve rural public education. She spent years promoting education and rehabilitation/reform in prisons, especially women's prisons.

After the war, she was the head of the U.S. committee that led to the pardoning of conscientious objectors in 1921, and sponsored financial and emigration assistance to Jewish educators, professionals, and intellectuals.

After her son was killed in World War II, she arranged a fellowship at Harvard Medical School for the two Philippine surgeons who tried to save his life.

Canfield Fisher and Willa Cather's decades-long relationship intensely revolved around their writing. Their letters, from 1899 to 1947, reveal a lasting and complicated friendship.

Canfield Fisher worked with the following organizations over the course of her life.

Sally was born in 1909. When her mother died in 1958, Mrs. John Paul Scott lived in Bar Harbor, Maine and had written 18 children's books as Sally Scott. Canfield Fisher's granddaughter Vivian Scott was also writing children's books and at least one had been published, evidently.

Battalion Surgeon Captain James Fisher with his comrades in the Philippines during World War II.

James (Jimmy) was born in 1913 and became a surgeon and captain in the U.S. Army during World War II. He served with the Alamo Scouts for three months at the end of 1944, following which he was attached to a Ranger unit which carried out the raid to free POWs imprisoned at Cabanatuan in the Philippines.

The Raid at Cabanatuan was a great success, with the Rangers suffering only two fatalities. Captain Fisher was one, mortally wounded by a mortar shell. As he lay dying the next day, his last words were "Did we get them all out?" He died on Luzon, January 31, 1945.

The Dorothy Canfield Fisher Children's Book Award is an award for new American children's books whose winner is chosen by the vote of child readers.

A dormitory at Goddard College in Plainfield, Vermont is named for Fisher.

Canfield Fisher spoke five languages fluently, and in addition to writing novels, short stories, memoirs, and educational works, she wrote extensively as a literary critic and translator. For tax purposes, her novels were written as "Canfield," her non-fiction as "Fisher."

Her best-known work today is probably Understood Betsy, a children's book about a little orphaned girl who is sent to live with her cousins in Vermont. Although the book can be read purely for pleasure, it also describes a schoolhouse which is run much in the style of the Montessori method. Another of her books, The Home-maker, was reprinted by Anita Miller's Academy Chicago Publishers calling it "way ahead of its time." In all, she wrote 22 novels and 18 works of non-fiction.

William Lyon Phelps said "All her novels are autobiographical, being written exclusively out of her own experience and observation."

Edit: March 29, 2016, by Vivian Scott Hixson, daughter of Sarah (Sally) Fisher Scott and John Paul Scott. Vivian Scott's book The Potted Witch was published (as noted) under her maiden name. After this, in 1995, The University of Missouri Press published a book of her cartoons (most of them previously published in The Chronicle of Higher Education), titled "He Looks Too Happy to be an Assistant Professor"; this book was published under the name Vivian Scott Hixson. In 2014, she published another collection of cartoons with Ex Libris, called "They Look Too Happy to be Temporary Adjunct Assistant Professors."

All content from Kiddle encyclopedia articles (including the article images and facts) can be freely used under Attribution-ShareAlike license, unless stated otherwise. Cite this article:
Dorothy Canfield Fisher Facts for Kids. Kiddle Encyclopedia.